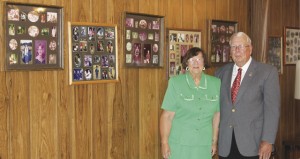 Holley Cochran / The Prentiss Headlight—Dr. and Mrs. Tripp in their home today. The walls display photos of countless men, women and children that have been welcome into their home and church, and have been a part of their lives over the past 50 years.

It was July 1964 and Prentiss Presbyterian Church hadn’t had a full-time preacher in 9 months.  A man from Chattanooga, Tennessee, in seminary at the time,  was asked if he would come as supply pastor, just for a clinical year.  He agreed.

That was fifty years ago.

The preacher at Dr. Tripp’s home church told him, “Don’t go.  You will get down there and we will never see you again.”  And that is precisely what happened.

I asked Dr. Tripp what made him decide to stay in Prentiss.  After all, his home church had 850 members.

“I had just turned down an internship in a congregation of 650 because I thought it was too small. Nothing brought us to Prentiss, Mississippi, but God,” he replied.

“Once I got here I found out these were the best people anywhere, so why would I want to leave?” he added.

“There was a man that introduced me to everyone around town.  He made sure that I got to go hunting and meet just about everyone.  He oriented me to the locals.  That man was Don Kruger.  He was very influential in our decision to stay.”

It wasn’t long before his preacher at  First Presbyterian Church in Chattanooga retired and his home church called on him to return and take over. 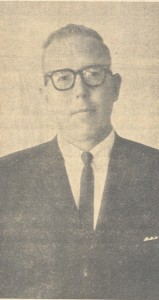 He turned it down.

He turned it down to stay right here in Prentiss, Mississippi.

“After I turned down my home church, I found it was easy to turn down everyone else as well.”

It has been said that a certain member of the congregation would approach each visiting pulpit committee and exclaim, “He is ours.  You can’t have him!”

Mrs. Tripp started teaching at Prentiss High School soon after they arrived.  Their son Mark was three years old at the time.

Dr. Tripp not only became the preacher, but the youth leader and the song director as well.  He also preached an early morning service on Sundays at our sister church Sleigo Presbyterian in Lone Star.

One of the members of the youth when the Tripps came was Jerry Q. Magee.  Jerry Q. was “courting” Donis Dungan at the time.  In fact, Donis and Jerry Q were the first couple Dr. Tripp married.   The first baby Dr. Tripp baptized, well, that would be this writer.

“I was 12 years old when the Tripps came, and they have truly been a blessing to us all.  I have heard almost every sermon Dr. Tripp has preached in the Prentiss Presbyterian Church,” said Patricia Blackburn Bridges.  That is a considerable amount of sermons.  According to Dr. Tripp, it would be around 8000.

“I came to Prentiss with a sports car, a Cadillac and a boat, that’s it,” said Tripp.

It wasn’t long after he got here that he started taking the young people out to the lake to ski.  They skied year round.  “We got so good at it, we would ski off the pier in the wintertime and never touch the water,” recalls Jerry Q. Magee.  “There are people all over the United States that know how to water ski only because of Dr. Tripp.,” he added.

“I have taught hundreds of kids to ski,  but I hope that isn’t the only thing I’ve taught them,” said Tripp.

The Tripps were in Prentiss about a year when they bought an old bread truck and converted it into a vehicle to carry the youth on trips. 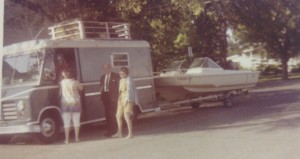 Dr. and Mrs. Tripp and the bread truck headed to the first youth Pensacola trip in 1965.

“We would sit on milk crates.  All we could bring was one pillow case full of our belongings.  There was no room for us to bring anything else,”  Patricia Blackburn Bridges recalled.

The Tripps originally lived in the manse across the street from the church.  They immediately opened their home to the children in the community.

“It wasn’t long, before we didn’t have room for everyone to gather.  That’s when we built our house out John Street.  “We wanted to have enough room to welcome everyone.”

They still open their home to youth, church and community members.  They host the youth weekly on Sunday nights, hold Fellowship Days for the congregation throughout the year,  host Christmas and Valentine parties as well as the annual Easter egg hunt.

If you drive up to their home today, you will see a tennis court, a small golf course, a pond, paddle boats, canoes, kayaks, trampolines, outdoor games of any kind, an indoor game room, an indoor swimming pool, and the latest in game technology.   Do you know many couples their age with a home that has a description like this?

And I know exactly which kids they are talking about.  Not just their own, but yours, mine and every one else’s. 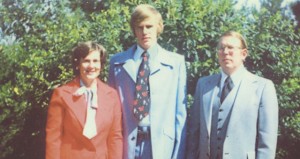 Not only have the Tripps  ministered to the youth in this area, but they were also instrumental in building Prentiss Christian School.

“Several men held a meeting to discuss the forming of a private school. They elected me as the organizer and first board president.  I drew up the plans for the building and got it built.  For the first several years the school’s mail came to my post office box.  The school didn’t have one yet,” said Tripp.

After the church purchased their first bus in the 70s, they would fill the bus with anyone who needed a ride and take them to the PCS ballgames.  “There are a lot of people in the community, not just our church,  that would have never gotten to go to a ballgame if Dr. and Mrs. Tripp hadn’t carried them on the bus,” recalls Donis Magee.

Mrs. Tripp taught English and math for 20 years at PCS and Dr. Tripp also served as the “Voice of the Saints” on Friday nights.

Through the years Dr. Tripp has served the community  as the president of the Rotary Club, PTA, and Chamber of Commerce.

Mrs. Tripp has served as State Chairman of Mathematics Teachers of the MPSEA, was selected to Who’s Who in Secondary Education, Personalities of the South, Community Leaders and Noteworthy Americans, and Who’s Who Among America’s Teachers.  She was selected as STAR Teacher eight times and is a member of The Delta Kappa Gamma Society International. 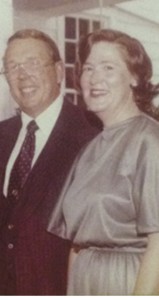 I don’t suppose there are many churches who are privileged enough to celebrate 50 years with the same preacher.  We intend to do just that on Sunday.

When told of the celebration in their honor, Mrs. Tripp stated, “You all don’t have to  do anything like that for us.  Don’t go to any trouble.” “But Mrs. Tripp, this is a big deal! 50 years is a long time,” she was told.

“We have had a wonderful life here.  The parents have shared their children with us. Everyone has been wonderful in times of trouble and in times of joy,” Mrs. Tripp added.

They are proud of their only son Mark and his children and great-grandchildren. But do  you know whose pictures adorn the walls of the Tripp residence along side their family? Mine, my children, and every other child and family that came to their home or walked in the doors of Prentiss Presbyterian Church.

There is a word for that: love.

We hope you can join us Sunday in honoring this couple that has given unconditionally and immeasurably to this community for 50 years.

Boys and girls in the area can take advantage of an opportunity to learn basketball techniques with NBA legend and... read more