JDC Forestry Association Tree Farmer and Logger of the Year

The Jefferson Davis County Forestry Association recognized Jeff Allen as 2014 Tree Farmer of the Year and Joe Burge as 2014 Logger of the Year during its banquet held Monday night at the Country Fisherman.

Currently employed by Miles Lumber Company Joe Burge started his business in the early 1970s and became fully mechanized in 1995. He currently does thinning and harvest cuts and averages approximately 14-16 loads per day.

This expert logger believes that having honorable long-term employees is the key to production and quality work, however, the credit for everything, he firmly believes, is because of his personal relationship with the Lord.

Jeff Allen has worked to practice exemplary forest management for over 30 years. He owns and operates a 565-acre tree farm south of Carson near the Marion County line. Originally purchased by his grandfather in the early 1900’s from the old Newman Lumber Company the property has transitioned over the past 100 years from tenant farming to row crop farming to cattle farming and now back to timber. Though there has always been some timber on the property most of the transitions to timber and tree farming began in the early 1980’s. The property currently is managed for timber production and wildlife and is home to the Happy Hollow Hunting Club where several of our Jeff Davis County residents spend their leisure time during deer and turkey seasons.

Henderson spoke to the crowded room about the current timber market, housing and future timber market projections stating, “I think we have a lot of reason to be optimistic looking out over the next few years. Consumer confidence has been trending upward and we should see a surge in those who have been putting off building houses.

The appetite for U.S. wood in raw logs and lumber to primarily China has had an 86% increase and is starting to take off. The pine beetle out west and British Columbia will cause the volume of pine there to go down and with a disruption of supply opens the opportunities for suppliers in the south.” However, Henderson did say with abundance of supply out there don’t look for much change in price for stumpage any time soon.

Adam Butler explained that the expansion of the MS Partners for Fish and Wildlife Program, Fire on the 40, a prescribed burning cost sharing program, to include Jeff Davis County potentially offers an opportunity to help with the expenses of managing forestry and wildlife to landowners and offered applications to those interested in the program. 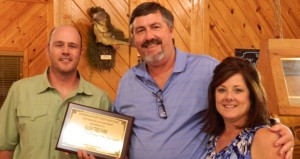