Hurricane Katrina, one of the deadliest hurricanes to hit the Mississippi Gulf Coast, ripped through the state working its way into the Jeff Davis County area August 29, 2005 bringing destruction and misery to thousands.

Loss of life in three states surpassed 1800 and 750 went missing. Major damage was done to the coastlines of Louisiana, Mississippi and Alabama and multiple scars are still visible today. As a slow moving storm with winds sustained up to 155 mph traveling inland at only 12 mph Katrina caused more damage than a fast moving storm devastating the coastline and wreaking havoc further inland.

That Sunday we in Jeff Davis County sat inside our homes watching the wind blow and trees topple as we prayed for safety for others and ourselves. We tried to keep in touch with family members until phone service, electricity and water ceased. Battery run radio became our only lifeline to the rest of the world. In the aftermath fuel was scarce and travel became excruciating. “Love bugs” came in biblical plague proportions to further torment. We were at the mercy of others to supply lines of water, ice and other necessities.

However, then we began to pull together. Neighbor began checking on each other. Neighbor helped neighbor sharing necessities and working to remove downed trees on homes, roads and driveways.

Many communities pooled food from thawing supplies in freezers having group cookings and gatherings finding reconnection with a sense of community, and with no televisions, neighbors sat around together telling old stories and again finding something to laugh about.

Dennis Broome, Jr. remembers Katrina well. His parents Dorothy and Dennis Broome lived just outside Prentiss on Hwy. 42. The elderly couple was nervous about the coming storm and so Broome who lived in Pearl at the time came to stay with them to help his dad with his disabled mother. 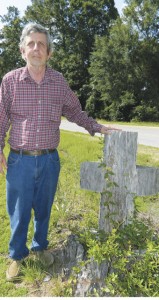 Shirley Burnham / The Prentiss Headlight—Dennis Broome, Jr. admits he wishes he had done more to preserve the now decaying cross cut in the tree trunk by lumberjacks from Montana removing trees downed by Hurricane Katrina.

Katrina roared in stranding the family as it did many in Jeff Davis County. As the storm began to rage Broome went outside to move a vehicle into the carport and just as he re-entered the house a huge pine came crashing down catching the backend of the car. He stated he did not venture out again until the storm was completely over.

Thirty-one trees on the property succumbed to the powerful storm states Broome. Those in immediate proximity threatening the safety of the house were removed by neighbors and a tree removal operation but Broome states he will not forget the group of lumberjacks from Montana who removed the rest of the fallen trees and left a cross cut into a tree stump on the edge of the property that has been clearly visible from Hwy. 42 for the past nine years serving as a reminder of Katrina and the goodness of others.

Both parents passed away in 2008 and when Broome retired he moved into the family home becoming a permanent resident of the county. He states he sees that crumbling cross every day now and wishes he had done more to preserve it stating it is a reminder of the hardships but also of the kindness of strangers in a time of need.

Katrina is just a memory now to many but one that should be passed along to those too young to recall its particulars or born after its major destruction was repaired. Lives have gotten back to “normal” and neighbors again sit in front of their televisions and miss the opportunities to fellowship on the front porch with each other, but they are safely confident, however, that should the need arise, we will again join together as one to overcome any obstacle such as Hurricane Katrina presented.

A ‘scary smooth’ start to the new school year