Local radio is an asset to Jeff Davis County

WJDR-FM 98.3 and WCJU-FM 104.9 are local Jeff Davis County radio stations with the interests of its residents at heart.

WCJU is news talk with all the popular talk shows and plays our favorite classic hits at night.

Tommy McDaniel of Sun Belt Broadcasting Corporation bought WJDR in 1985 and opened WCJU in 1999. McDaniel states what makes WJDR and WCJU special is that when he was on the air every morning with Keith Bridges he had “the most fun allowed by law.”

McDaniel has a degree in accounting and radio/TVv. He is a Vietnam vet and Air Force pilot and also a veteran in the broadcasting business and warns those interested in a career that broadcasting “gets into your blood,” and encourages others to “choose work that you look forward to every day. Nothing is better than being of service to your community.” 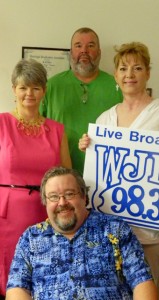 Beginning in 1973 McDaniel owned and operated stations in Columbia, Brookhaven and Hattiesburg before moving to Texas. When he moved back to Columbia he purchased the JDC stations and one in Columbia.

“John Polk bought the Prentiss station from Max Smith in McComb and got a license for FM. He improved it a lot and built the new studio putting in the FM tower and I bought it from him,” states McDaniel.

McDaniel bases his operations in Columbia, his hometown, but visits the JDC facilities about once a month stating that is made possible because of his good employees.

“There have been a lot of good Jeff Davis County people associated with WJDR and WJCU.” Past alumni include the familiar voices of Bob “Tiger of Love” Harrison, Keith Bridges, Bobby Rushing, Greg Berry and the late Danny Polk as well as many others.

Nine year part time employee of the station Missy Jones says after her “people job” at City Hall she likes the solitude the radio station offers.

“We are glad to cover Prentiss Christian, Prentiss High and Bassfield High ball games,” states McDaniel. “We support them in every way we can. We are glad to be a part of the Run for the Roses and all other special JDC events. We are here to provide information to the county whenever an emergency comes up or anything of that nature. And, we are always open to programming suggestions.”

To the listening public McDaniel says, “Thanks for your loyal listenership and support and for supporting our advertisers and thanks to the Prentiss Headlight for always working with us.” 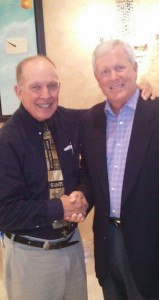 WJDR and WJCU owner Tommy McDaniel with the “voice of the New Orleans Saints Jim Henderson”.