Game two a physical game for the Saints 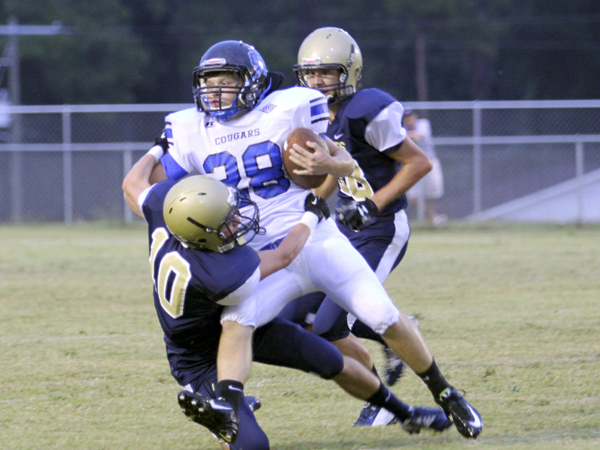 THE PRENTISS HEADLIGHT / Wesley Daughdrill making the stop for the Saints.
(Photo by Jennifer Hall, www.photosbyjenny.zenfolio.com) 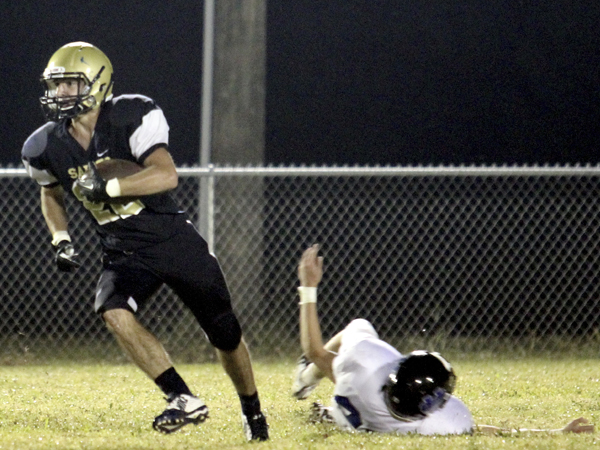 THE PRENTISS HEADLIGHT / Michael Goddard making a move to avoid being tackled and moving the ball up the field for the Saints.
(Photo by Jennifer Hall, www.photosbyjenny.zenfolio.com)

The Saints hosted the Cougars of Hillcrest Friday night. Prentiss won the opening toss and elected to receive. Austin Daughdrill returned the opening kickoff 27-yards up to the Saint 42-yard line. A quick three and out forced a Blake Greenlee punt. A great punt and cover by the Saints put the Cougars in a hole at their own 7-yard line. HC put together a long, time consuming drive surviving three third downs and a fumble to score on a 10-yard run. The PAT was no good giving HC a 6-0 lead with 4:05 to play in the first quarter.

The following kickoff was a touchback giving the Saints the ball on the 20-yard line. The Saints were only able to gain one yard before having to punt again. Greenlee’s punt rolled out of bounds at the midfield stripe. Hillcrest lost yardage back to the 32-yard line before having to punt back to Prentiss. The punt was downed on the 38-yard line of Prentiss as the quarter ended.

Three plays later, QB Tanner Hathorn hit WR Josh Daley on a 40-yard slant for a touchdown. The PAT was missed, but a roughing call gave the Saints another shot. Daughdrill scored the two-point conversion giving Prentiss an 8-6 lead with 11:02 to play in the second quarter.

Daley kicked off to the Cougars who returned the ball to their own 39-yard line. HC put together an 11-play drive, but were shut down on a 4th down attempt giving PC the ball back on their own 24-yard line. Prentiss put together a 7-play drive of their own capped off by a 31-yard pass to wide open Michael Goddard from Hathorn.

The Cougars were again flagged for roughing the kicker giving PC a short two-point conversion attempt again. Daughdrill again scored on a run giving Prentiss a 16-6 lead with 3:55 to play in the half.

Daley kicked off to HC who returned the ball to the 43-yard line before being tackled. Four plays later, the Cougars connected on a 45-yard pass for a touchdown with only 1:29 left in the first half. The two-point conversion was no good, but the Saints lead was cut to 16-12.

The Cougar kickoff sailed into the end zone again for another touchback. Three plays later, Hathorn’s pass was intercepted and returned to the Saint 31 yard line. Four plays later, HC threw a 49-yard Hail Mary pass with no time on the clock for a touchdown over multiple Saint defenders. The PAT was good giving Hillcrest its first lead of the game 19-16.

The Saints had to kick off to start the second half. The defense came up big forcing a Cougar punt. However, a 67-yard punt put the Saints deep in a hole at their own 5-yard line. Prentiss was only able to gain 5 yards before having to punt back to the Cougars. Following the punt and return, HC had the ball on the Saint 25-yard line. Four plays later Hillcrest found the end zone again. The PAT was good giving the Cougars a 26-16 lead with 6:38 to play in the third quarter.

On the very next play, QB Blake Greenlee was intercepted at the Saint 45-yard line. Hillcrest was able to move to the 16 of the Saints before being stopped. They attempted and made the 33-yard field goal increasing the Cougar lead to 29-16 with 7:38 to play in the game. The HC kickoff was caught by Blake Lightsey for no return at the Saint 28 yard line. Prentiss put together a nine-play drive, but were again intercepted when Greenlee attempted a pass to Goddard. The Cougars had the ball on their own 20-yard line. As the Cougars attempted to run out the clock the Saints were attempting to force a turnover.

Eight plays later they did force a fumble that was recovered by Peyton Dungan at midfield. The Saints were able to pass their way down to the Cougar 23, but Hathorn threw an interception in the end zone. The Cougars knelt out the clock giving Prentiss its first loss of the season. Prentiss falls to 1-1 as they go into conference play against Brookhaven Academy.