A presentation of a special Bible was made to Sybil Cole for her 65 years of service as the church’s pianist and Duke and Linda Barnes of Hathorn presented a concert of special music after lunch.

The history of the church serves as a reminder of where lies the center of past community life. In June 1904 during a business meeting in Antioch Baptist Church it was requested that a new church be formed in the Carson area because of those having to travel as far by foot or buggy to either Bethany or Antioch to attend worship services.

The first pastor was Bro. L. D. Posey and in 1905 the first church building was completed and there were 58 members within a year’s time. John Baker (Annie Daley’s grandfather) is said to have sawed the logs from which the boards of the church were made. Baptisms were first performed at the water pool of Myers’ farm but the spring water was pretty cold so later on baptisms were done in Jaybird Creek at the Atwood Water Mill.

In 1924 a tornado severely damaged the church building knocking it off its foundation and the church was rebuilt basically as it is today though there have been several renovations to the facilities since then and the first indoor baptism was held in 1958.

The church bell rescued from the bell tower after the tornado still rings occasionally calling those around to worship services and serves to remind the surrounding community that they are welcome at Carson Baptist Church and the mission statement of the church continues to be, “Enter to Worship, Depart to Serve. 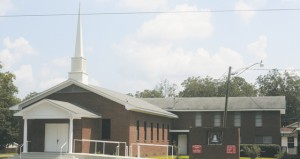 The ALS Ice Bucket Challenge has taken the nation and social media by storm over the past several months. The... read more