The ALS Ice Bucket Challenge has taken the nation and social media by storm over the past several months. The challenge dares nominated participants to be filmed having a bucket of ice water poured on their heads and then nominating others to do the same. Nominated participants have 24 hours to comply or make a donation to an ALS Charity of their choice, or do both.

According to www.alsa.org, between July 29 and September 8, The ALS Association and its 38 chapters have received an astonishing $111.1 million dollars in donations.

With only about half of the general public knowledgeable about amyotrophic lateral sclerosis (ALS), also known as Lou Gehrig’s Disease, the Ice Bucket Challenge is making a profound difference.

“We have never seen anything like this in the history of the disease,” said Barbara Newhouse, President and CEO of The ALS Association. “We couldn’t be more thrilled with the level of compassion, generosity and sense of humor that people are exhibiting as they take part in this impactful viral initiative.” 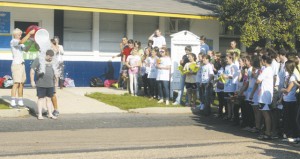 Holley Cochran / The Prentiss Headlight—Reverend Kevin Walker, a teacher at Prentiss Christian, takes the challenge during school as students and faculty show their support. As of September 8, the ALS Association and its 38 chapters have received 111.1 million dollars in donations from the Ice Bucket Challenge. 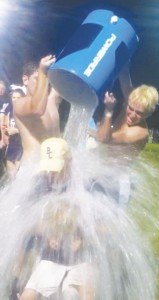 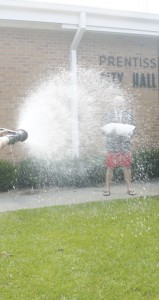 Holley Cochran / The Prentiss Headlight—Prentiss Mayor Charley Dumas took a different approach to his challenge by
holding a bag of ice while Prentiss Fire Chief Howard Kelly sprayed him with a fire hose.