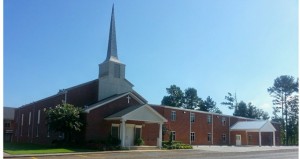 A dedication service was held at Whitesand Baptist Church Sunday, Sept. 7th to consecrate the newly constructed educational and family life facility to the service of the Lord.

The building will replace the aging educational facility that will eventually be torn down and replaced by parking space. The old building had several levels that were difficult for some to navigate. Special attention was given to making sure the new facility’s ground level was even with the church sanctuary giving better accessibility.

The large modern industrial kitchen has already begun to serve well to the Wednesday night youth and children’s meal and Whitesand’s homecoming day in August was the first large gathering in the building proving it to be a huge benefit with space and comfort to a large crowd of current and former Whitesand members.

The Praise Team of Whitesand Baptist Church began the service Sunday afternoon with the song, “All Things are Possible,” a tribute to the many who believed that the new educational and family life building discussed and dreamed about by many for so long would one day become a reality. Peggy Bass stated that this was the fulfillment of a dream of her husband, the late Spurgeon Bass, as well as that of the late Francis Smith.

A certificate of appreciation and a study Bible were presented to Colby Stewart, Construction Overseer and Building Committee members were recognized for their work on the project. 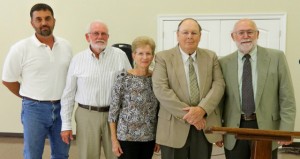 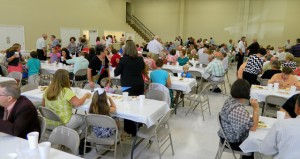 Shirley Burnham / The Prentiss Headlight—Interior of the new building provides much needed space for fellowship and food as well as other activities and the exterior blends with the existing facade.