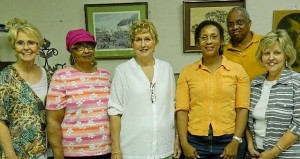 The fledgling organization discussed goals of the organization and proceeding forward with an oral history project for JDC and elected officers for the upcoming year.

Many are enthusiastic about this new organization that’s goal will be to preserve the history of the county through oral interviews and later donated artifacts and the hope for the future is to eventually have an open museum specialized to the Jeff Davis County history.

Project Coordinator Natalie Bell is currently working on a master’s degree at USM and has connected local interested JDC residents with the USM Center for Oral History Director Dr. Louis Kyriakoudes who will help with training on the project.

Business for the organization was done but also memorabilia and history of the county including some family history and town histories of Jeff Davis County were shared.

If you know of someone who is proficient in history of the area and may be willing to share their knowledge contact one of the officers or Group members. If you would like to join this organization contact Sylvia Ward or Mary Curtis, or attend the next meeting Oct. 14th at 5:30 p.m. at the historical Blount Bank Building on Prentiss’ main street.

Prentiss Christian will not play ACCS due to tragedy

Friday night’s varsity football game between Prentiss Christian and ACCS was postponed and later forfeited due to the tragic death... read more