Like many single parents Joyce Speights had neglected health screenings because she was busy raising her family, working her job and trying to make ends meet. Since insurance did not pay for screening mammograms at the time she had not added that extra expense to her already heavy load until her kids were grown and she was working at Jeff Davis County Hospital.

“I’m sorry to say it had been some twenty years since I had a mammogram so it was definitely overdue. When Dr. Moran’s office called and asked that I come over I knew in my heart what it was. It felt like an elephant hit me in the stomach,” states Speights, but being the strong woman she is she got past that and forged ahead.

Speights’ children accompanied her for a core biopsy that came back malignant and in June of 1999 she was diagnosed with Stage II breast cancer. She went into surgery to have a mastectomy knowing chemo for four months would follow surgical recovery.

Her recovery, however, was not uncomplicated and she fought Staph infection and required additional surgery. While taking chemo her white count would drop so low she had to delay some of the treatments making the course last twice as long.

Having worked with doctors at UMC those who took care of her were not strangers and fact that her son Stev en was a doctor and could walk her through this journey helped her confidence tremendously. “When I worked there I did things for them when they needed it and now when I needed them they did things for me,” states Speights.

It was a long journey and when chemo did not make her too sick she drove herself to her treatments and continued to work.

Speights was not alone in her battle with breast cancer. She states that summer seven women in Prentiss were also diagnosed. Some despite treatment lost their battle and since then two of her sisters have also fought cancer.

Though she had complete support of family from sisters, children and their spouses Speights says she tried to not encroach on their busy lives and stay as independent as possible. Since she has been cancer free she continues to enjoy that lifestyle of independence. 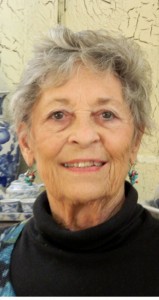 Shirley Burnham / The Prentiss Headlight—Native of Prentiss all her life Joyce Speights states regular screenings are key to early detection of breast cancer.

When Relay for Life came to JDC the second year after she was diagnosed Speights volunteered for service. She relinquished her job with the JDC Relay Committee about three years ago but continues to work for a cure.

Recent statistics of the American Cancer Society estimated cases of breast cancer in the U.S. to be 296,980 with 39,620 resultant deaths. There are typically no signs or symptoms of breast cancer when the tumor is small and more easily cured and that makes it all the more important to have regular screenings for early detection. When it has grown to a size that it can be felt it is usually a painless lump. Lumps or swelling in the underarm lymph nodes can occur and be felt even before the original tumor is large enough for manual detection. Any persistent abnormality in the breast should be check out by a physician.

Speights best advice to women is to never miss a mammogram, keep regular checkups and self-exams.

October is Breast Cancer Awareness Month and there is no better time to get your mammogram or checkup up and establish or continue a regular routine of screenings that just may save your life.

Community Health Fair at St. Mary’s is a success