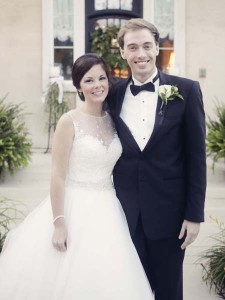 The groom is the son of Mr. and Mrs. James Russell Dumas, III. He is the grandson of Mr. and Mrs. John Thomas Polk and Dr. and Mrs. James Russell Dumas, Jr.
The double-ring ceremony was officiated by Reverend Robert Gill. Nuptial music provided by Mrs. June Harrison, organist, Mrs. Patricia Williams, pianist, Ms. Milena Rusanova, violinist, and Mrs. Curry Gill, vocalist.
After the chiming of the hour the wedding ceremony began with the processional of the Cross and the processional of light. The cross bearer was James David Dumas. The acolytes were Rebecca Phelps Dumas and Jeremiah Watkins Dumas, all cousins of the groom.
Given in marriage by her father and grandfather, the bride wore an exquisite ivory Allure lace, all gown featuring a sheer-illusion neckline encrusted with Swarovski crystals. Her cathedral length veil was edged with pearls and matching Swarovski crystals.
The bride carried a hand-ties bouquet of pale pink peonies, white roses and greenery. Tied into the bouquet were two pieces of family heirloom jewelry. On her right hand she wore a ring of her great grandmother Elizabeth Van for whom she was named. Given to her on the eve of the wedding by the groom the bride wore antique diamond and sapphire earrings for her “something blue.”
Attending the bride as maid of honor was the groom’s sister, Frances Camille Dumas. The matron of honor was Avery Robinson Adkins. Bridesmaids were Marganie Ruth Dumas, sister of the groom, Meghan Michelle Van, sister of the bride, Ruth Hardin Bryan, Erin Katherine Williams, Lauren Theresa Manuel, and Kelly Ann Bartlett. The Bridesmaids wore a stunning sweetheart on shoulder gown from the bridesmaid designer, Andrew Adela. The dresses featured ruched bodices that lead into flowing skirts. These latte colored airy chiffon gowns gave the perfect silhouette. Each bridesmaid carried a bouquet of pink peonies, white roses and amaranthus.
The flower girl was Hannah Elaine Van, sister of the bride. The ring bearer was Michael Dean Harrison, cousin of the groom. Program and registry attendants were Lawson Joy Dumas and Katherine Dell Dumas, cousins of the groom. Rachel Johanna Beeland served as the bride’s proxy.
The groom’s father, James Russell Dumas, III served as best man. Groomsmen were John Moody Polk, brother of the groom, Jeremiah Percy Dumas, uncle of the groom, Robert Walter Franklin, Edwin DeWeese Welsh, Michael Bradley Youngblood, Jacob Clark Rowland, and Justin James Reedy. Ushers were Karl David Capaning, Jeremy Andre Dixon, and Franklin Baxter Price.
The wedding coordinator was Mary Jo Wicke. The floral arrangements for the ceremony and the reception were created by Je Loru’s Florist and special memories were captured by photographer Rachel Boyer.
Following the ceremony the bride’s parents hosted a reception at 108 Heron Cove, Brandon, Mississippi, home of the groom’s parents.
The bride and groom arrived at the reception aboard a festively decorated party boat owned and operated by the bride’s grandfather.
Under the glow of twinkling lights the guests danced to the music of Lukenbach and enjoyed uniquely decorated food stations featuring Southern specialties by Fresh Cut Catering.
The Mississippi State station was a great place to reminisce and enjoy a variety of MSU cheese and MSU ice cream.
Wine was served in glasses hand cut from wine bottles by the groom’s father. The glasses were given to the guests as a memento of the wedding day.
The bride’s three-tiered white chocolate cake was overlaid with butter-cream and white chocolate icing. The cake was decorated with pale, pink peonies and displayed on Portuguese marble.
The groom broke tradition and chose a variety of flavored cake style donuts served on copper. The centerpiece of the table was a vintage, copper, coffee urn, brought from England by the groom’s grandmother.
Throughout the reception the couple incorporated their favorite things with a vintage flair. The uniqueness of the couple, in combination with the beautiful waterfront setting made the wedding a memorable event.
One the eve of the wedding, the groom’s parents hosted a dinner after the rehearsal at their home in honor of the bride and groom. Upon arrival guests were served hors d’oeuvres and cockatiels. Guests were directed through the home to dining tables on the terrace set with a southern theme enhanced by the familiar fragrances of freshly cut southern magnolia centerpieces. After the dinner guest reminisced and were entertained by tributes to the couple from family and friends. The evening concluded with a champagne toast to the bride and groom.
After the reception, the couple departed through twinkling sparklers held by family and friends and boarded a waiting party boat on the Ross Barnett Reservoir to sounds of cheers and well wishes for a happy life together.
Following a honeymoon to San Francisco and Napa Valley, California, the couple is at home in Brandon, Mississippi.
Earlier that day a bridesmaid luncheon was hosted by Mrs. Mandy Bryant, Mrs. Kristin Dowdy, Ms. Chrissy Fortenberry, Mrs. Katie Humphreys and Mrs. Mandy Oliphant, friends of the bride’s parents.
A groomsman’s brunch honoring the groom, family, and friends was given by friends of the groom’s parents in the home of Mr. and Mrs. Buddy Youngblood.
In December to begin the festivities a Christmas ornament party was given in Starkville, Mississippi, by Robin Bryan and Ruth Hardin Bryan, in the home of Mrs. Gretchen Passons.
An “around the house” party honoring the groom was given at the home of Mr. and Mrs. Gary Heine.
A McCarty pottery party was hosted by friends of the bride in the home of Mr. and Mrs. Jet Herring.
On Super Bulldog Weekend a party was given by the Dumas family in Starkville, Mississippi, for the couple.
The bride’s parents and grandparents hosted a home and garden party honoring the bride and groom at the home of Mr. and Mrs. Jerry Van, in McComb, Mississippi.