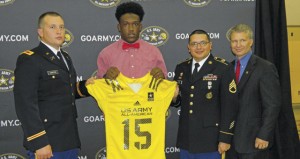 Bassfield High School deBassfield High School defensive back Jamal Peters was given a personal invitation by members of the U.S. Army All-American Bowl Selection Tour team to play in the 2015 U.S. Army All-American Bowl. Peters was presented his honorary jersey in front of family, friends, teammates and classmates in the BHS gym Tuesday and the Bassfield high gym exploded with cheers in celebration for this talented hometown young man.

“Peters was chosen not only because he excels on the football field, but because he possesses strengths similar to the Army soldiers of mental, emotional and physical toughness,” stated SG 1st Class Devon Perrymon member of the All-American Bowl selection team.

When asked how he felt about receiving the honor Peters stated, “It’s just shocking to me. I had dreamed about getting a chance to show my talent but now it has happened it’s still shocking.” Speaking about being among the other 89 athletes from around the nation Peters said, “I’m definitely going to be with a lot of talent. I just want to show them what Mississippi is about and do my best.”

BHS principal Will Russell stated, “This is an honor that covers Bassfield, Jeff Davis County, and the state of Mississippi and shows that even in a small town you can dream big and have your dreams come true.”

The bowl game will be televised live on NBC from the Alamodome on Saturday, January 3, 2015, at 12 noon CST.