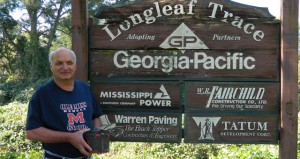 Shirley Burnham / The Prentiss Headlight—This geocache has been hidden by Howard Kelly somewhere in the Prentiss Gateway Park.

Yes, you read that right. There is hidden treasure in Jeff Davis County and you are welcome to look for it. All you have to do is follow the “treasure map” to find it. If you find the treasure you can take some as long as you leave something in return and replace the “treasure” container in the same place.

Jeff Davis County has joined the list of thousands of places in the nation and world on geocaching.com that gives coordinates of hidden caches and the number of cache sites is still exploding.

Geocaching is a growing phenomenon of outdoor fun activity where participants use the GPS (Mobile Positioning System) receiver or other navigational devices (apps on phones) to hide and seek containers hidden anywhere in the world. The first documented placement was in 2000 when Dave Ulmer of Oregon hid a cache and posted it on Usenet Newsgroup. A geocache and a plaque called the Original Stash Tribute Plaque now sit at the site.

A “cache” or “geocache” may be in anything weatherproof from a large coffee can, Tupperware container or ammunition box and usually contain items for trading such as toys, trinkets, memorabilia of the area, most of little monetary value because the fun is primarily in the hunt. There is also a pad and pencil to log your name, place of residence (to see how far you have come) and the date the cache was found.

Geocacher Howard Kelly states there are probably close to 25 caches now on the Rails to Trails Longleaf Trace from the Prentiss Gateway Park to the Jeff Davis Lake and many more hidden all along the way to Hattiesburg. He has hidden some himself and has found others in the county and in places he has traveled.

Kelly states someone told him about geocaching and since then he has enjoyed finding caches with his wife and with grandchildren in LA, MS, TN, and has even found a virtual cache in Disneyland. He says it has been a good way to meet new people and find interesting out of the way places that a normal tourist would have missed.

Kelly has one cache hidden near his home and one night he saw a vehicle stop so he went out to investigate. He met geocachers traveling from Washington State that were geocaching all the way to Florida.

Keith and Sandra Warren have been geocache hunters for years and have recently been hunting while in the Smoky Mountains. William Lee is a geocacher and has hidden some caches in the county.

If you would like more information on this fun activity for kids and adults go to the free site geocaching.com and register to see a map and get coordinates to begin finding hidden treasure. Just be sure if you find a cache to leave something in the place of what you take and return the container to its original place. Happy treasure hunting!