Jackets win and advance in playoffs

Another win, the eleventh straight playoff victory for Coach Lance Mancuso, and the road to Starkville is still in play.

The Enterprise Bulldogs came into Bassfield for the first round of 2A playoffs this past Friday night, keeping the road to Starkville open.

But, first a little egg on my face correction. The Mississippi High School Athletic Association website states at the bottom of the playoff bracket “2. Second round-fourth round the team that has played a fewer number of home games will be designated the home team.” That statement is what I used to tell you that Bassfield would play at home against Pisgah in last week’s paper. What I did not know was that ‘home games’ referred to ‘playoff’ home games, not regular season home games. My apologies for any confusion, I was wrong. 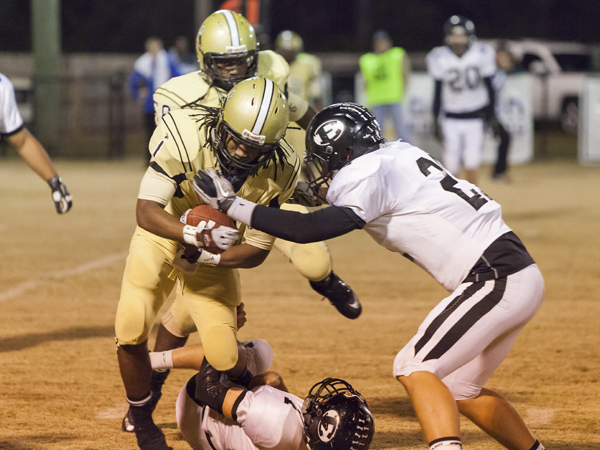 THE PRENTISS HEADLIGHT / Josh Applewhite #1 trying to get around a Enterprise Bulldogs  in the Jackets win Friday night.

Taking the open kickoff, Enterprise was not able to move the ball on three consecutive runs, but on the ensuing punt, Josh Applewhite muffed the punt and appeared to have lost total concentration on what to do as he just stood and watched as the Bulldogs recovered.

Wasting no time, the Bulldogs offense went to work, two quick passes for a rare first drive touchdown against the Jackets defense. The PAT was good and the Jackets trailed 0-7.

The Jackets offense only took 3 plays with the largest gain a 33-yard pass from Timothy Arnold to Jamal Peters. T-Rod Daniels finished the drive with a three yard run, Kevin McNair PAT was good, and the Jackets tied this one up 7-7.

The Jackets defense stiffened on the Bulldogs next drive, giving the Jackets the ball back at the 19 after a 36-yard punt with no return.

Once again, three plays and the Jackets scored again. The exact three plays from the previous series. Run for twenty yards, a 27-yard pass and catch from Arnold to Kenny Island, finished off this time by Ron Thompson wearing number 7 this week. Kevin McNair PAT good, Jackets on top 14-7.

Nine straight runs by the Bulldogs, doing what few teams have been unable to do all year, pushed the ball right down the field for a 70-yard drive. PAT by Enterprise was no good this time, Jackets kept the lead 14-13.

The Jackets answered right back after Malik Shorts, the star young freshmen, came out of a pile on an onside kick with the ball giving the Jackets good field position at the 45. Five plays this time, all runs, and Raschaud Green gets his first touchdown of the evening finishing the drive with an eleven yard run. PAT by McNair, once again was good-Jackets increased their lead by eight to 21-13.

Once again the Jackets defense allowed the Bulldogs to run right at them, moving the ball from the 29-yard line to the Jackets 45 before Justin Hawthorne stopped a 4th and 5 attempt.

The 55 yards was finished in one play this time by an unsuspecting running back in Keenan McLaurin. Kevin McNair kicked his 4th straight, Jackets starting to take control 28-13.

Enterprise gave the Jacket fans reason to be concerned as they marched the ball down field again on 6 runs and two incomplete passes to the Jackets 43, but the last incomplete pass ended the drive as the defense of the Jackets bent-but did not break.

Jackets scored three times on the next drive before one finally counted. T-Rod scored on a 61 yard run after Timothy completed his third pass of the night of 31 yards, but a holding call at the 43 pushing the ball back to the 33-yard line.

Timothy completed his fourth pass of the evening to Jamal Peters in the end zone from 37 yards out, but was overturned for offensive pass interference. Ron Thompson put an exclamation on all this non-sense scoring from 52 yards out. Jackets take a commanding first half lead 35-13.

The story of the Jackets did not alter on the first drive of the second half. Taking the second half possession first took just two plays to go 51 yards. Enterprise had tried their 4th onside kick, but it did not work as the Bulldogs defense didn’t either on this drive. Timothy Arnold hit T-Rod Daniels for a 50-yard touchdown pass. McNair 6th straight PAT good-42 to 13 as Jackets put this one to bed.

A three and out by the Bulldogs, and Timothy Arnold used his leg and arm to set the Jackets up for another scoring drive. Running for 6 yards and throwing for 17 and 12 yards to Jamal Peters, then finished by Ron Thompson from 40 yards out. Kevin McNair was good on his PAT attempt-Jackets up 49-13.

Going eleven yards backwards showed that Enterprise was tired. A punt to the Jackets 12 yard line and the Jackets offense was back on the field. A new set of backs, made no difference as the Jackets scored in just 3 plays as Sanchez Berry scored from 80 yards out. McNair PAT good-Jackets with a blowout at 56-13.

Jackets special teams come up with the kickoff fumble by Enterprise, but punted for the first time tonight as the young guys could not get a first down.

Seven runs and 24 yards and the Bulldogs were punting again. The Jackets fumbled on the third run of the possession giving Enterprise a little excitement as they took one run of 30 yards to score their 20th point of the night. Jackets finish this game taking a knee with an impressive score of 56-20.

“The name of the game in the playoffs is just win. You have earned your right to play next week, lot of things to clean up. We need to show we are the premier team,” Mancuso told his team after the game.

The polls don’t like the Jackets play this year either as they have dropped the Jackets to 59th in the State with several teams ahead of them that are not in the playoffs, and some with losing records. This year’s team is getting no respect from the prognosticators.

The Jackets travel to Pisgah (meaning summit or peak in Hebrew). Pisgah is a mountain named often in the Old Testament. A fitting battle for the Jackets as they must both reach a summit and peak to finish this journey in Starkville.

Pisgah is in Sandhill, MS, a city almost on the reservoir east of Jackson. Simple directions are to go straight up Hwy 13 to Morton to Hwy 431, which becomes Hwy 43 which takes you to the school on the left. Very winding road. Could turn left on Wilson Dr. in Puckett to Hwy 43 and follow 43 north.

The best Highways to take are to go to Jackson as if you were going to Jackson Prep on Hwy 25 (Lakeland Dr.) go opposite of Jackson Prep on 4 lane highway until you get to Pisgah Road, turn right to school on left. Either way, allow two hours for the trip, based on possible Friday evening traffic.

Pisgah is 7-5 on the season making them a 1st seed in 6-2A. They lost four straight games to start the season including a loss to Enterprise 48-24 in the 4th game of the season. They lost their 5th game to Bay Springs later on in the season. They defeated Richton to reach the second round. Running back, 6’ 3” inch TJ McGinnis has rushed for 2050 yards this season.

Players of the game this week are:

The second half was the total opposite. Jackets rushed for 83 yards and two touchdowns, three completions for 79 yards and one touchdown. The defense held Enterprise to 38 yards rushing with one touchdown, and 24 yards passing for a total of 62 yards total offense.

See you in Pisgah!