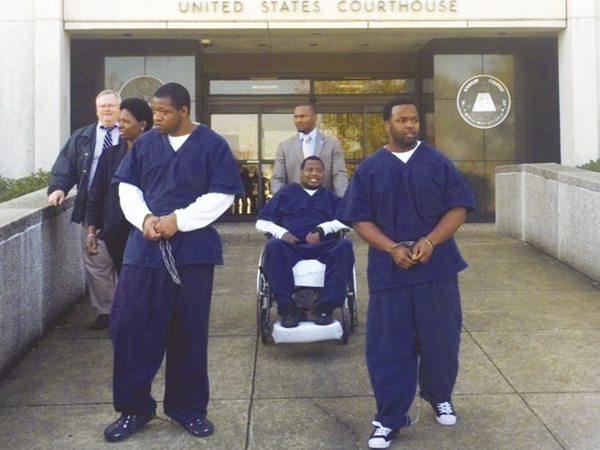 During the sentencing hearing Starrett noted the DNA evidence found on a flashlight in the ditch of a home that was the scene of a Jeff Davis County triple homicide. Starrett acknowledged the investigation showed slugs recovered from the scene matched weapons used by the three men in the Cedar Grove drug trafficking organization.

This triple homicide mentioned in proceedings is from 2012 where Arvin Smith, 80, Maxine Smith, 74, and Roland Smith, 48, were found shot to death in their home at 89 T.W. Bass Road in the Carson community.

The three men have yet to stand trial for the murders, however through the course of the investigation and details that emerged in the trial showed the link in DNA evidence, witness testimony as well as photo evidence that links the murder with the drug trafficking organization.

As all three defendants faced the judge during their sentencing, all refused to speak except Roger “Hitman” Jones.

“I want to make the court aware that the court found me guilty of crimes I didn’t commit,” said Jones.

“I’m not going to apologize to the court, only a guilty man apologizes,” said Jones. Aside from the brief statements made by Jones, as well as him stating he wants to appeal from this day on, he spent most of the sentence reading hanging his head down, and not looking to the judge.

To each defendant, Kentorre Hall and Roger Jones, Judge Starrett closed his sentence reading with “it is with this courts intention, that you never leave prison alive.”

Of the three, the final that was sentenced was Martel Barnes.

“This is tragic, you could have done better,” said Starrett. “The citizens of Jeff Davis County deserve better than what is going on there, and this case is clearly an example of the problems that exist,” said Starrett.

In closing, Starrett looked down to Barnes and stated: “the intention of this court is that you never leave prison alive.”

Members of the Smith family were on hand during the sentencing hearing and noted that to them this is a portion of justice that has been a long time coming.

During the October trial the government called dozens of witnesses to the stand, all who were linked to the three men in some form or fashion, along with a handful of investigators and law enforcement officials.

The six­count indictment, which had count two dismissed, details that the defendants knowingly and intentionally conspired, confederated and agreed together with each other, and with other persons known and unknown to the Grand Jury, that they conspired to possess with intent to distribute a controlled substance.

According to the indictment, it was part of the conspiracy that they conspired to possess with intent to distribute at least 500 grams or more of methamphetamine, less than 50 kilos of marijuana, as well as a controlled substance that involved a substance that contained a detectable amount of cocaine.

Investigators exchanged hugs as well as handshakes on what they deem a “winning day for justice” out of South Mississippi.