According to the JDC Coroner Jimmy Slater, an autopsy report will be issued pending the completion of toxicology and histology procedures. No trauma or foul play was indicated. Provisional pathologic diagnosis is that the death resulted from natural causes. 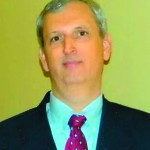 Blackwell was elected coroner in November 1999 and took office January 2000. He remained coroner for the county until 2012 when he was defeated by current coroner Jimmy Slater.

He served as deputy coroner a number of years prior to being elected coroner.

During his tenure, Blackwell was the only coroner in the state to hold a certification as a senior crime scene analyst.