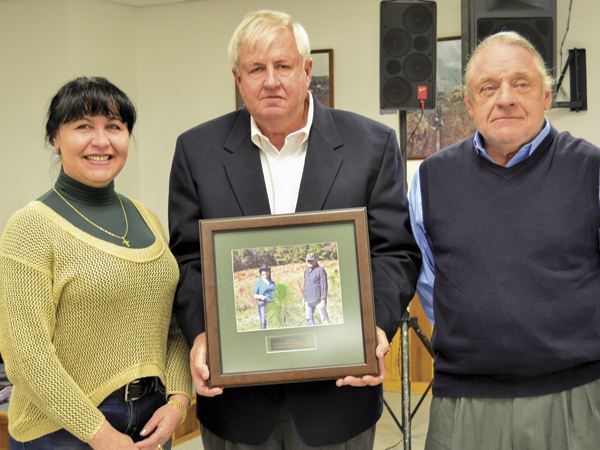 Pierce was recognized as an individual who has devoted his entire farming operation for longleaf pines or loblollies stated District Commissioner Sandra Warren. In the past Pierce has dedicated hours to caring for some longleaf pine that was planted in an old crop field. He had to spray continuously to kill morning glory and other vine like plants using funds out of his own pocket, showing his dedication to beating the odds against planting in established pasture and old crop fields.

Father and son team Chuck and Charles Pruitt reshaped their entire beef cattle farming operation by fertilizing and liming according to soil tests, installing water troughs and cross fencing to promote better utilization for forage stated Warren. They have rebuilt several miles of old fence that was overgrown with privet hedges and other woody vegetation and planted or replanted some of the most highly erodable soils to trees.

Those attending the meeting were treated to a concert by Elvis (alias Tim Johnson of Madison) who rocked the house with great musical artistry sprinkled with plenty of fun antics.

The JDC Soil & Water Conservation District Commissioners oversee the county’s watersheds and assist landowners and land users in partnership with the Natural Resources Conservation Service. These services varied during the year from working with farmers, individuals, professional consultants, homeowners or students, some of which included technical assistance to over 300 landowners, developing acreage appropriate conservation plans, providing seminars for wildlife and horse management, Firewise program information, and distributing EQIP funds.

Awards accrued during the year in MACD Area 3 were NRCS Employee of the Year: Elvert Cole, Commissioner of the Year: Sandra Warren and Environmental Livestock Stewardship Award: Larry Rogers.

Unofficial totals show Will Russell will be the next Jefferson Davis County Superintendent. With absentee votes counted, the unofficial totals... read more