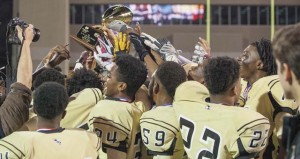 For the third consecutive year the Bassfield Yellowjackets completed the goal set in spring practice.  Can you spell 3-PEAT!!! Tying Coach Willoughby’s record of wins in 84-86.

It never is the intent of the Jackets to just play well, just to win district, or make it to the playoffs.  Many teams in the division are satisfied with just that, but this team-the expectations are championship-nothing less.

To win a championship it takes hard work, dedication, teamwork, great coaching and a whole lot of heart.  It also takes a group of young men believing that there is nobody any better than they.  You schedule it; they will show up and play.

The season saw its share of ups and downs -injuries, heartbreaking losses-but through it all the eyes never left the prize.
Calhoun City went into this championship game a solid favorite by all the media and powers that be – the head coach touted their team’s strength on the line, their ability to run at will, almost guaranteeing a win on Monday before the game at media day.

Maybe it was the disrespect given the Jackets all year by MaxPreps, the exclusion from major news outlets around the state, whatever it was – it did not deter the Jackets from staying focused and reaching the pinnacle of success.

The Jacket team showed once again to the world the class that they are-as a special Bassfield, black and gold #42 jersey was made for the brother of Loyd Star deceased brother Peyton Flowers.  Parker served as honorary team captain and was an inspiration to all who were there.
A magnificent setting at Starkville, weather was cooperating, and the fans showed in large numbers even though the trip was long. 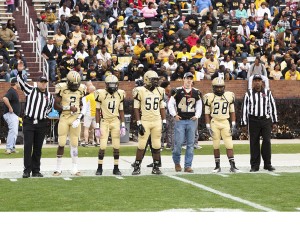 Tony Waits / The Prentiss Headlight—Parker Flowers, brother of the late Loyd Star senior player Peyton Flowers, served as an honorary captain for Bassfield in the state championship game. The team had a Bassfield jersey made with Peyton’s name and number and presented it to the family during the pre-game meal.

The Jackets offense did not disappoint as they took the opening kickoff and showed Calhoun City that that may have the size (275 across the line) they did not have the speed and could not contain the outside running.  A nervous Timothy Arnold fumbled the opening snap losing a yard, but then the trio of running backs got the drive going quickly.

Ron Thompson ran for 10, then back to back 17 yard runs by T-Rod Daniels and the Jackets were knocking on the door.  Five more by Ron and Raschaud Green found the end zone with 8:54 in the first quarter.  Kevin McNair PAT was good and the Jackets made a statement early -leading 7-0!

Calhoun City with all its’ pomp and circumstance hit the field and felt the power of the Jackets defense up close and personal.  Runs of 2, 0 , and 1 yard and the punting team were on the field.  A good 50 yard punt set the Jackets on their heels at the 19.
The Jackets started a good drive but a sack of Timothy Arnold set up a 2nd and 16 and the Jackets could not convert.  Jamal Peters punted 37 yards and the Wildcats were back on offense.

A tough 13 play drive was put together aided by a pass interference call, that was actually a touchdown saving penalty, but was shut down by a sack by Jamal Peters and Gerald Reese.  A 36 yard field goal went wide right and the Jackets lead remained.

The third possession of the game and we are a third of the way into the second quarter.  Back to the run game and add to the trio in the backfield, Jamal Peters who went 23 yards on a run after Josh Applewhite took the corner sideline for 13.  This time Timothy Arnold did the honors and scored from 1 yard out.  McNair PAT was good and the Jackets were in control 14-0.

Calhoun City took over at the 35 and a mis-direction run that should have been a sack in the backfield, ended up 48 yards down field.  A quick run up the middle and the Wildcats were on the board.  A delay of game forced a re-kick of a good PAT and this time it missed to the right again.  Jackets lead now cut to 14-6.

On an improvised playground type play, Timothy Arnold hit a wide open Xavier Harper -his new favorite target, for 40 yards and the Jackets were in scoring position in the red zone at the 16.  Ron Thompson went untouched up the middle for the last 16 yards, 2 plays and 64 yards using only 20 seconds off the clock.  PAT was no good, Jackets still in control 20-6.

Needing something good to happen, Calhoun City took advantage of good field position at the 50 and used all that muscle up front and methodically moved the ball down field on a 9 play drive scoring with 58 seconds left in the half, PAT was good Jackets lead cut to 20 – 13.
Trying to make something happen before the half was not going to happen thanks to a half ending sack by Calhoun City on quarterback Timothy Arnold and a loss of 12 yards.

Calhoun City took the opening kickoff of the second half, fully expecting to tie this one up or take a lead on this opening drive.  Timothy Arnold ended those dreams quickly as he intercepted an errant throw on 3rd and 11.  Timothy turned this INT up field down to the 28.
It took only 4 running plays, and a successful fumble recovery of  Ron Thompson’s 9 yard run by Rachaud Green, before T-Rod Daniels scored from 5 yards out keeping the Jackets in control after a 2 point PAT by Rachaud – Jackets lead now 28 – 13.

Calhoun City took their opportunity with a bit of urgency as this one seemed to be slipping away.  Using a short field thanks to a good kickoff return, the 42 yards was eaten up pretty quickly with direct power runs, with Jackets defense tackling with 4, 5, and 6 players at times.  The Wildcats punched it in on a 3rd and goal from the four yard line.  Two point conversion was good and the gap lessened to 28 – 21.
Even though Calhoun City was matching touchdowns, the advantage or momentum never seemed to turn their way.  The Jackets took their possession at the Wildcats 31 yard line and it took all of 3 plays and 1:23 off the clock to take that 14 point lead back.  T-Rod went 57 yards to finish the drive, and all the air seemed to have left the balloons on Calhoun’s side line.  Jackets up 35 – 21.

Jackets defense stepped up and stopped the Wildcats cold in their tracks forcing a punt on a quick 3 and out.  It set the Jackets up to take control of this game as the 4th quarter was approaching.

Taking the ball and the drive into the 4th quarter, the Jackets were prepared to make the knockout punch.  Rachaud Green went 43 yards on the second play setting up good field position at the 39, then 17 more yards by T-Rod and a penalty pushes the ball to the 11.  Ron Thompson finished off the 2 yards putting the Jackets up 42 – 21 after the successful PAT by McNair.

Calhoun City was never ready to throw in the towel at this point taking over at the 48 after a good kickoff return.  A 44 yard pass completion from Gates to Nabors to the 4 on a blown coverage by the defensive backfield.  It still took 3 runs to score from the 4, a missed PAT and the Jackets lead cut to 15 points – 42 – 27.

An onside attempt by the Wildcats, was recovered by the Jackets.  Jamal Peters took the snap from the “wild” formation, PAT no good and the lead was back to 21.  Jackets lead 48 – 27.  What little life the Wildcats had, just seemed to have left them.

A 14 yard pass by Calhoun City got the Wildcats poised to try to match touchdowns, but the Jackets defense were having none of that.  A long incomplete pass a false start, a run of no gain after a big major hit from Donovan Reggans, and another incomplete pass and the Wildcats were punting.

A seventeen yard punt thanks to a partial blocked punt by Jamal Peters, who seemed to be taking over this game, and the Jackets offense was back in business.

On the 3rd run T-Rod scored from 55 yards out, with the final dagger in this championship.  PAT was blocked, 54 – 27.
Calhoun City caught the Jackets celebrating early and left a tight end wide open down the middle.  A 45 yard pass completion and a good 2 point conversion with 4:19 to play – Jackets lead cut to 54 – 35.  The touchdown should have been called back – as the tight end was not covered up.  The two point conversion, was no good either, as the ball was 6 inches from the goal line.

No matter the game was in hand.  An onside kick was touched at the 49 not going 10 yards and the Jackets take over at that point.  Druden Knight got his chance on two carries, before Sanchez Berry hit the sidelines for 39 yards and a touchdown.  PAT no good Jackets in a shellacking over Calhoun City 60 – 35.

Four incomplete passes by Calhoun City, three knees by the Jackets and the Championship was headed back to Bassfield for the 3rd straight year and for the 4th time in 6 years.

“I want everyone to know how proud I am of the fans – we have the best fans in the State of Mississippi.  Our guys went through two losses and some injury adversity – but this team is what high school football is all about”, Mancuso told the audience after the game.