Jeanne Polk celebrated the home place and heritage of the Holloway/Polk families by inviting the public to view the antiquities and become a part of the unique history of the Holloway/Polk house situated just south of Prentiss on Hwy. 84. The home was built 150 years ago in the thriving town of Mt. Carmel and is the only building that continues to stand as a memorial of that town’s era. 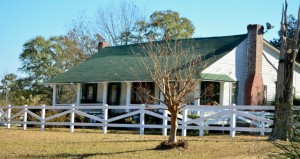 The Prentiss Headlight—The Holloway/Polk House listed on the National Register of Historical Sites is just south of Prentiss on Hwy. 84.

Polk invites visitors to experience the historical feel of the home as she gives guided tours of its vintage rooms and explains the significance of beloved artifacts.

The home was placed on the National Register of Historic Places in Mississippi in October of 1994 and with the Mississippi Secretary of State as the Holloway-Polk Historical House and Cultural Center in 2010.

The mission of the home, according to Polk, is to restore and preserve the house and its historical significance, to be a resource for Mississippi history classes and schools in general and to be a resource to the regular public.

Polk is very knowledgeable in the history of home and the area surrounding it that was originally a part of the Covington County and later became Jeff Davis County in 1906. It is obvious she delights in sharing pertinent information and answers questions with confidence gained by diligent research and a genuine love for the home that she shared with her late husband Colonel Paul G. Polk shines through her words.

Polk gave a guided tour of the home pointing out the features relative to the time period of its construction as well as interesting tidbits regarding the owners William R. Holloway and later occupants, the Robert Decatur “Cap” Polk family. She imparted interesting information about the now ghost town of Mt. Carmel. To understand the significance of the home a little history of the town in which it was located may be in order.

Historical records include a plot of the town done in 1874 with an inscription that includes details of that the town was laid out in March 1819 by John Ragan, Esq. There was a center courtyard where animals could be watered from the two springs located in the town and wagons could be left for loading of essential goods. Family names were inscribed on the occupied 74 lots that included early families of Pope, Williams, Holloway, McRaney, Rutledge, Hall and Magee. The Mt. Carmel Academy had the lot in the lower left hand corner of the town and Mt. Carmel also boasted a post office and three stores as well as the school.

The town was mainly known for Mt. Carmel Academy, a coeducational school, the first of its class found in southeast Mississippi. Established by John Ryan in 1830. At one time in its history of existence tuition was a whopping $4 a month. Its claim to fame included graduates Dr. C. H. Ramsay, a medical doctor who served in the state legislature, Joe Mathison who became sheriff and then chancery clerk of Covington County and Rev. Lewis McInnis who held pastorates of Presbyterian churches in Jackson, Nashville and Boston. The Academy continued to function sporadically and at one time boasted a student body of 70-80 in number. A lack of teachers was cited as the main reason for suspension of the school’s function and in 1945 it was finally disassembled and students moved to Zion Seminary in what is now the town of Seminary, MS.

Mt. Carmel is also listed in the Department of Archives and History as the home of several wealthy including Bill Rutledge, one of Mississippi’s first after the Civil War millionaires, and is listed as the oldest settlement in Jefferson Davis County incorporated in 1835 and unincorporated in 1904. More than likely a lot of the town’s drying up had to do with demise of the academy and being bypassed by the railway line in favor of Prentiss.

In the early 1900’s, African Americans began buying land and establishing farms and businesses and the tiny town revived briefly. In 1911 Robert Decatur Polk, a plantar and businessman bought the Holloway House. He and his wife, Anna had 11 children that included Paul Jones Polk who was the father of Col. Paul Polk, Jeanne’s husband. Other African-Americans began to purchase land and many tenants and sharecroppers lived on the acreage tending cotton, corn, peanuts and soybeans and raising cattle on pasture land. A gristmill and blacksmith shop brought in visitors to the community; however, the population of Mt. Carmel continued to dwindle. In 1940 the census listed only 25 residents all African-American. Hall’s Grocery closed in 1958 and the last E. D. Gray’s Store & Café closed around 1979. 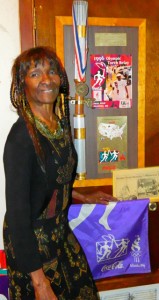 The Prentiss Headlight—Personal memorabilia of her husband Colonel Paul G. Polk, one of the carriers of the Olympic Torch through Jeff Davis County is displayed nearer her personal space.

According to Jeanne Polk’s sources a relative of Joe Mathison (Neil Mathison) had the home built in 1884 of heart pine lumber in dogtrot style with a detached kitchen. The large front porch has a unique ceiling built in the “coffin” style with a rolled upward appearance (like the top of a coffin). Its comfortable furnishings beckon one to sit and stay a while and discuss days of long ago. The double doors of the closed in “dog trot” Polk explains had to be large enough for a coffin to go in because families brought the remains of their loved ones home and wakes were held there until funeral time. The short entrance hall has original floors, walls and ceiling and the bedroom to the left has the original beds while the parlor on the left holds vintage pieces from the previous owners. The kitchen is now attached and there is a more modern addition where Polk spends her time. Her late husband’s presence is still felt memorialized in the wall of artifacts belonging to him that included memories of his being one of the JDC residents who carried the Olympic torch, considered an “age old symbol of democracy,” through the county in 1996 and the event is also commemorated with a billboard to the side of the dwelling.

Though she is not a native of the area her diligent study, long time residence and especially her love for the property, its history and the people who occupied the dwelling makes Edrice Jeanne Polk an apt and excellent curator. Her own history adds to the interest and unique home in that Polk became a world traveler with The People-to People Citizens Ambassador Program. Her college majors were English and a double minor in Social Studies and Library Science and she is a licensed professional counselor. She continues to be an active part of the JDC community.

The home continues to be commanding viewed from Hwy. 84 that was rerouted to spare the property and house from destruction. Polk encourages children’s groups and the curious to give her a call and set up a time to come visit the historical home. You can reach Jeanne Polk at 601-792-4311 or email at polk@hollowaypolkhouse.com. 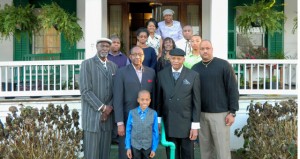 The Prentiss Headlight–Many of the faith based community came to celebrate the 150th anniversary of the Holloway/Polk House and to take a tour of the historic home.