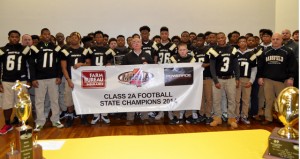 “Mississippi Farm Bureau Insurance is proud to sponsor the Mississippi High School Activities Association,” stated Bridges. “As members of the 2014 Bassfield Yellowjacket football team you have made us proud! A state championship proves that you are the best. It is not just one championship we are talking about but a 3-peat.”

Coach Lance Mancuso expressed his gratitude for all the support given to the team from the community and parents as well as the faculty and staff of BHS. He voiced appreciation to the Mississippi High School Activities Association and Farm Bureau for the recognition of the accomplishments of the team.

“I am extremely proud of the young men who have dedicated themselves to being their very best,” stated Mancuso, “its one thing to have the aspiration and another thing to accomplish it.”

Media Director of the Mississippi High School Activities Association Todd Kelly presented an award to Kenneth Island for Athlete-Scholar and to Trodrick “T-Rod” Daniels for “Player of the Game.” Both awards were sponsored by C-Spire

BHS athletes may rest on their laurels and bask in the limelight, which they well deserve, for a time but the thing that probably keeps them on top is the encouragement to be their best on and off the field. The first thing Coach Mancuso did after the meeting ended was to speak to the players about staying on top of their school work and beginning a weight-lifting program. 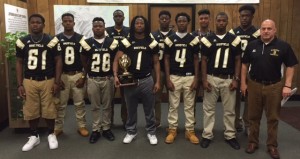 Holley Cochran / The Prentiss Headlight—Bassfield Yellowjacket Seniors were recognized at the school board meeting Tuesday night, along with their coach, for their exceptional talent both on the field and in the classroom. 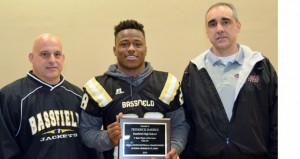 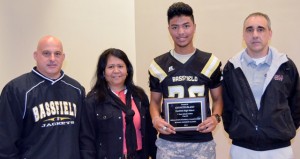 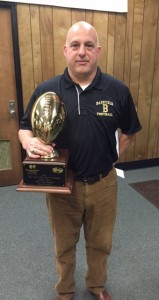 Holley Cochran / The Prentiss Headlight—Coach Lance Mancuso has been named the National Federation of High School Coaches 2014 Coach of the Year, as well as Mississippi’s AA Coach of the Year. He was also chosen to coach the Mississippi-Alabama All-Star Game. 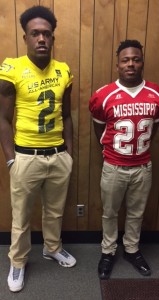 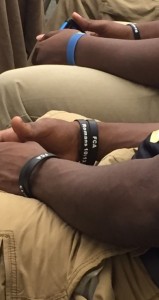 Holley Cochran / The Prentiss Headlight—One might think the Bassfield Yellowjackets only have football on their mind, but this photographer noticed something impressive at the school board meeting Tuesday. The players each had Fellowship of Christian Athletes bracelets on bearing Romans 10:13 — “For everyone who calls on the name of the Lord will be saved.” I would say these players are learning much more than just football.