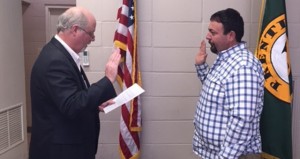 Joseph Bullock has been hired by the Board of Alderman as the Police Chief for the Town of Prentiss.

Bullock was sworn in Monday by Mayor Charley Dumas.

“I have grown up in Prentiss and lived here most of my life. I love this town and am thrilled by the opportunity that has been given to me.

I will strive to have more community involvement. I believe that citizens should know who the police are and have positive interactions with them,” Bullock stated.

Joseph is a veteran law enforcement officer with 17 years of experience. He has worked in many areas of this field including narcotics investigation, K-9 handling, and assistant chief.

Joseph is a graduate of Prentiss Christian School and attended Jones County Junior College. He is currently pursuing a Bachelor’s degree in Criminal Justice.

Joe is married to Kristen Bullock, who is a Biology teacher at Prentiss High School.  They have one son, Blake.

Bullock is the son of David and Kathy Bullock  of Prentiss. He is the grandson of Jimmie and Willie Armstrong, and June and the late Joe Bullock.