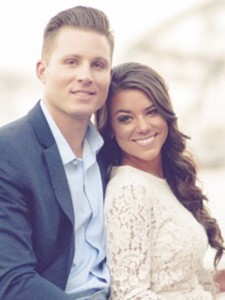 Molli is the granddaughter of Mr. & Mrs. R.C Speights of Prentiss, Mississippi, and the late Charlie M. Thornton Jr. and Ruth Roberts Thornton.

Chris is the grandson of Mrs. & the late Mr. William Kick of Waterville, Maine, and the late Mr. & Mrs. Leonard Langlais of Winsow, Maine.

The bride-elect is a 2007 graduate of Prentiss Christian School. Molli received her Bachelor of Science in Business from The University of Southern Mississippi in 2011.

Molli is currently living in Nashville, Tennessee, and working as a marketing and integration specialist at Nashville’s largest real estate brokerage.

The groom-elect is a 2002 graduate of Winslow High School. Chris received his Bachelor of Science in Business from Plymouth State University in Plymouth, New Hampshire, in 2006.

Chris is currently living in Nashville, Tennessee, and working as a digital radiography specialist for Idexx Laboratories.

The couple will be married on April 18, 2015, in Nashville, Tennessee.

Walters & Jackson to unite in marriage

Mr. and Mrs. Wayne Walters of Hattiesburg announce the engagement of their daughter, Susanna Grace, to Clinton Blake Jackson of... read more