Thursday evening the Jeff Davis County Fire Fighters held the annual banquet at the Rosenwald Institute Building to honor those who had been chosen from each of the county’s volunteer fire departments as an outstanding fire fighter for the year. 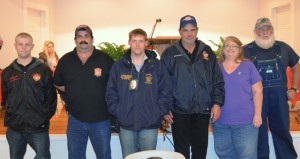 Overall 2014 Fire Fighter of the Year Award went to Robert Earl Stephens of the Prentiss Dept. 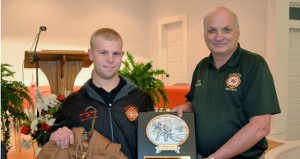 Shirley Burnham / The Prentiss Headlight-Overall Award for 2014 Fire Fighter of the Year went to Robert Earl Stephens of Prentiss Fire Dept. and was presented to him by Fire Chief Howard Kelly.

The banquet was attended by many of the county’s dignitaries who spoke nothing but praise for those who volunteer their time and effort to help our residents be safe and save their properties. The profuse rain falling during the meeting, as stated Mayor Charley Dumas, was a reminder that regardless of the weather the fire fighters of the county respond whenever they are needed and he expressed appreciation for their dedication to the job.

Jerry Evans, Fire Fighter Coordinator of Lawrence County made a special presentation to the family of Jessie Sanford on behalf of the MS Fire Academy. Evans, a trainer, stated Sanford was one of the most dedicated fire fighters he had seen, gathering information even before she was old enough to join and always eager to participate in any training program offered showing a heart and aptitude for the job.  Sanford’s dedication and young life was cut short by cancer in 2014. 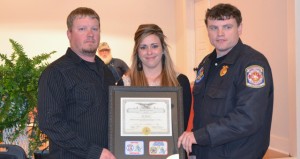 Keynote speaker for the event President of the MS Fire Fighters Association and Covington County Fire Chief John Pope stated that the honor of being selected fire fighter of the year by your peers is the highest honor you can receive. Pope stated fire fighters were servants to the community and need to be fully involved in every aspect of the service to make a difference in lives. He also reminded fire fighters that they meet people on their worst day and to keep the word “service” in the forefront. 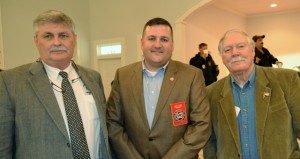 The meal was prepared and served by Mack’s on the River Fish House and door prizes were donated by numerous businesses in the county.

Discrimination is a problem for the disabled

“The hardest thing about having a disability is discrimination,” states Jamie Womack to the audience gathered to hear her speak... read more