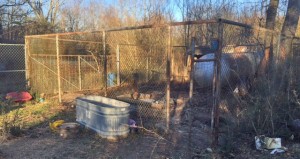 Holley Cochran / The Prentiss Headlight–The small pen that all six horses were contained in with no food and only rain water.

Five horses were found dead Tuesday morning at the end of Old Radio Road in Prentiss.

A neighbor to the property, Keisi Berkhalter, went to the Sheriff’s office to voice her concerns. “Our dog kept showing up with blood on him, so we investigated and discovered the dead animals,” she said.

According to Sheriff’s Deputy John Wayne Tolar, five horses were found dead inside an estimated 20 X 20 pen, with one horse still living.

Inside the pen with the horses was a large gas tank, an old well, and a storage building.

The horses belonged to Pete Raynes, of 1020 Anna Street in Prentiss. He was charged with six counts of animal cruelty and released on bond.

According to the neighbors, Raynes returned to the property over the last few weeks and was apparently aware of the conditions of the horses.

“I went to the Sheriff’s Department because I am a concerned citizen and I felt terrible for those horses,” said Berkhalter. “I am very appreciative of Deputy Tolar for coming and taking care of this situation,” she added.

The one living horse was seized and adopted by Frank and Shelly Riley. Friends and neighbors came to their aid by way of hay, blankets and physical help lifting the weak horse.

Despite many efforts the horse died Monday afternoon.