JDC Teacher of the Year 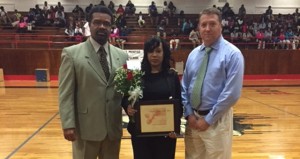 Madison was selected by the District-wide Teacher of the Year Committee consisting of retired educators, principals and city officials throughout  Jefferson Davis County.

Ms. Madison will now compete for the State Teacher of the Year Award to be decided upon sometime next month.

According to Prentiss High Principal Pete Howell, Ms. Madison was chosen among numerous deserving applicants as the “Best of the Best” from the Prentiss High faculty. “The selection process was rigorous and varied, thus giving those selected the most thorough vetting for the awards process,” he stated.

“Ms. Madison is a veteran teacher who shows enthusiasm, content knowledge, instructional skills, compassion, and dedication to the students under her care. She is usually the first on campus and the last to leave each day. Ms. Madison is also pursuing her administration certification and will one day

lead teachers with the same dedication to excellence as she shows at present. Ms. Madison’s class of 8th grade science MCT2 students had a 207 QDI score, the best singular score in Jefferson Davis County Schools. I am proud to call Ms. Madison, PHS Teacher of the Year,” he added.