Everyone who did business with Regions Bank was familiar with the welcoming smile from Peggy Shivers that graced the establishment until her retirement in 2007. However, unless the light of her life walked in during a visit none could know how radiant that smile really was when it was bestowed on her Valentine of 54 years. Just like her special smile for him the memory of their courtship and early years has not diminished. 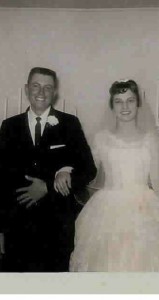 The Prentiss Headlight—At their marriage Bobby was 19 and Peggy was 18.

“We knew each other in passing,” states Peggy Shivers, “but Bobby lived in town and I lived in the country. In 1960 he moved to our community. Bobby was not academically inclined–he was going to be a pipe liner like his dad and four uncles, however, he took bookkeeping and we were assigned to the same table. He asked me to walk him off the football field on a Friday night (as was the custom then) but he got his foot broken during the game and was taken to the hospital. That Sunday he stuck that casted foot out in front of me as I went down the steps of the church and asked me to go to the movie. We were just going to be friends but never dated anyone else.”

The couple married a year later. He was 19 and she was 18. Being the first to marry of their siblings they knew there would be no financial help from their parents and worked to make their own way.

Shivers had left the morning after high school graduation on a pipeline job and worked out of state. Soon after the two married he worked on construction of the Standard Oil Refinery in Pascagoula then went on to work on the Missile Base near Picayune where their first child, Angie was born. When that job was completed he transferred to Monticello to work on the paper mill and the couple moved back to Jeff Davis County where they were living when their daughter Susan was born. 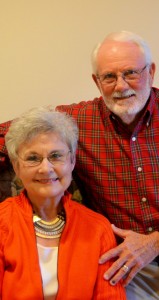 The Prentiss Headlight—Since retirement Peggy and Bobby Shivers enjoy traveling and working on projects together.

“Times were hard and jobs were scarce so Bobby worked on the pipe line for several years,” states Peggy Shivers. “The children and I stayed in JDC while he traveled. When he went to Iran on pipeline work with several other men in 1975 it was the hardest days for us with no communication. I would send letters to the main office in Texas where they forwarded them on. It took letters three weeks to arrive.”

Peggy went to work at the bank in 1974 and states her co-worker and dear friend, Becky Williamson, whose husband Don was with Bobby, helped her through her most anxious times. She assured Peggy they were looking out for each other.

When Shivers came home he went to work with Singley Construction and retired in 2008 but still works part-time for the company.

Peggy Shivers feels the most painful time in their life together was when their son-in-law died in 2001 stating, “God has always been our refuge and strength throughout all of our marriage. Our faith, family and friends have been a constant force in our marriage.”

She was diagnosed with breast cancer in 2004 and has been in remission since Oct. 2005 stating, “The doctor says remission—I say God healed me and I give Him the glory.” During this time Bobby was her strong place and companion.

Since retirement this active couple enjoys going on mission trips and traveling, and look forward to doing more in the future.

The advice they would give to young couples of today is to, “Trust in the Lord with all your heart, and lean not on your own understanding; in all your ways acknowledge Him and He will direct your paths. Prov. 3:5.”

Bobby and Peggy Shivers have two daughters, Angie and Susan, and son-in-laws, Jeffery and Marcus, four grandsons, Kevin, Eric, Camden and Callen and three great grandsons, Carson, Will and Ace.