Where Are They Now: Sister Catherine Hanegan

Sister Catherine (Cathy) Marie Hanegan celebrated her Golden Jubilee of Religious Profession as a member of the Sisters of the Sorrowful Mother with a Jubilee Mass celebrated by Rev. Peter Varghese at St. Peter’s Church in Bassfield. 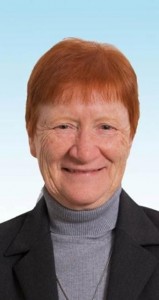 Many family members and friends were present to see her renew her religious vows during the Mass and honored her for 50 years of service with a reception prior in the Parish Hall. She stayed for three weeks in the county spending time with family and friends.

Hanegan is a native of Bassfield who graduated from Bassfield High in 1960. Her brother Alfred states when she graduated from high school she already had made the decision to join the Order. On leaving her hometown she entered the Congregation of the Sisters of the Sorrowful Mother in Milwaukee, WI in 1961. She attended Mt. Mary College in Milwaukee WI receiving her undergraduate degree and obtained a Master of Arts in teaching of reading and a Master of Science in healthcare services administration from Cardinal Stritch University in Milwaukee. She is also a NAACC certified chaplain.

Sr. Cathy Hanegan taught primary school in the early part of her career in a number of Catholic schools in Wisconsin and then began her integration into the catholic healthcare system. In Port Washington, WI she served as director of pastoral care in the St. Alphonsus’s Hospital, vice president of Mission and Cultural Integration at St. John, and president and chief executive officer at St. Johns Villas Senior Care in Tulsa, OK. She has also served two four-year terms as Provincial Superior for the US/Caribbean Province.

The Sisters of the Sorrowful Mother serve in 10 countries in the world in 67 different locations. Members of the order are challenged to give themselves completely to Christ as instruments to bring fuller life to others.

Sr. Hanegan’s favorite verse is: “Do not be afraid, for I have redeemed you; I have

called you by your name, you are mine. Should you pass through the waters, I shall

be with you …” (Isaiah 43:1b.2). She enjoys reading, classical music, spending time with family and friends, walking and also baking.

Sr. Cathy Hanegan continues her career of service and is now in her second five-year term as Assistant General Superior in Rome, Italy.

Though she has returned to her duties in Rome we in Jeff Davis County are proud to claim her as another native child that has made a difference in the global world in which we live.