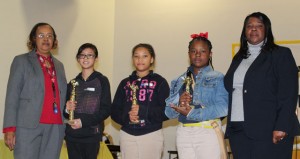 Fifteen students began the event, which was held February 12, at Bassfield High School.

All participating students received a ribbon and the top three received trophies.

Tran will represent the district in the State Spelling Bee in Jackson on March 17, 2015, at 10 a.m. The event will be televised on the Mississippi Public Broadcasting Station.