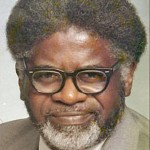 He was born April 10, 1929, in Prentiss, MS., to Grady and Pearlie Hall. The family moved to Columbia, MS, where he was raised. He is a 1951 graduate of Marion County Training School in Columbia. Later, he moved to Dayton, Ohio, where he enlisted in the Army in August 1951. A Vietnam veteran, he also served his country during the Korean Conflict and during peacetime. His tours of duty included numerous assignments in and outside of the United States. Having served 21 years in the military, he honorably retired in August 1977. After his retirement from military service, he attended Great Plains Technology Center and acquired a new career as a skilled carpenter.

He married Melvelene Anderson on Oct. 25, 1985, in Lawton. He was a faithful member of Union Baptist Church for 30 plus years. He served with various ministries of the church including the Brotherhood Choir where he sang and served as secretary. He also sang in the church choir, the Mission Choir, and Inspirational Choir and he regularly attended Sunday school.

His parents and all siblings, Pauline, Maggie, Martha, Columbus, Harry and Louis, preceded him in death.