The Dixie National Rodeo and Livestock Show is the largest rodeo east of the Mississippi River and many “trail riders” of hundreds of equine enthusiasts braved the unpredictable February weather to take the journey via horseback or wagon. 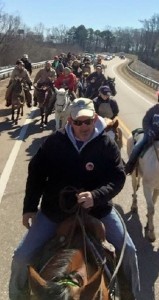 The Prentiss Headlight–The line of riders behind Sorey just shows a small part of the wagon train as the riders travel toward Jackson.

Wagon trains began from various meeting sites to merge together in Jackson at the MS Fairgrounds and participate in the grand parade on Saturday.

Perry Sorey of Prentiss was one of those who traveled on the Dixie National Wagon Train Mt. Olive Ride under Wagon Master Tommy Sullivan. The wagon train began on the property of Danny Joe Sullivan in the Mt. Olive/Mize area Feb. 6th.

“There were about 25 wagons and some 200-plus horse riders that began the 88 mile ride that took six days,” states Sorey. “We made it to Jackson Thursday and had a rest day Friday before participating in the parade Saturday.”

Sorey states he didn’t stay overnight this year but participated in most daily rides carrying three of his 25 horses.

It takes quite a bit of planning for a project this big and Sorey states those in charge of the event did an excellent job. Even portapotties are a part of the wagon train (the last part states Sorey).

Sorey states every morning about half of the horse trailers and campers were taken to the next overnight spot and a bus ferried people back and then others were transferred there. So, when you got to the campsite your gear was there already.

The weather can be a heavy factor in the success of these rides and in years past cold, wet weather contributed to wagons getting stuck in muddy bogs and participants had to really bundle up to stay warm but Sorey states the weather was perfect this year.

“It was a little cool in the mornings but it was dry and sunny so there were no issues this year of getting stuck or anything,” states Sorey. He also says that most participants are seasoned riders and their mounts and wagon animals are conditioned adding to the ride going smoothly.

Food was not a problem either. Some folks from Louisiana did most of the cooking from their wagon and the small fee that is paid at the beginning of the ride covered this as well as miscellaneous expenses.

The days consisted of riding about 12-14 miles a day with short rest stops and breaks and about 45 minutes for lunch. After the day nightlife was pretty quiet at the campsite.

“With the days so short,” states Sorey, “by the time we got to our camping spot, got gear off, fed the horses, got cleaned up and ate supper it was getting on into the night and people were ready to bed down themselves.”

Wagon trains arrived in Jackson on Thursday. As well as Sorey on horseback two wagons from JDC, one driven by Porky Stephens and one from Clem driven by Gene McQueen made the trip.

After a rest day Friday all the trail riders from around the state came together to finish out the week with the grand finale on Saturday -the Dixie National Parade.

The parade started at 10:30 a.m. and lasted about an hour and a half showcasing all who had made the trip in wagons and on horseback.

Perry states the biggest benefits from making the ride include the camaraderie and getting away from other distractions to just enjoy riding. “Most of those who participate just love their animals and enjoy this time with them. I enjoyed taking my different horses and just getting to ride.” 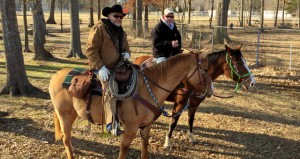 The Prentiss Headlight—Perry Sorey on his roping horse “Bull” with friend Bobby Patrick of Hattiesburg.