2014 Citizen of the Year: Janie Winscott 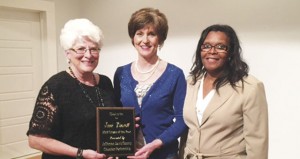 Community treasure is not judged by the number of dollars in the City Hall’s coffer or the splendor of the county’s buildings but by the normal, but extraordinary,  people who make up its population. Each outstanding citizen adds to its riches and uniqueness. In this aspect because of its people Jeff Davis County is richer than many other areas.

When the Winscott family came to Prentiss 29 years ago the community did not know they would receive a continuing treasure. Their boys, John, Joshua and Jacob, became friends with others here, Bro. Winscott became a beloved pastor and Janie became a valued teacher in the JDC school system and religious community. The family was so integrated and in love with the community that when a tragic accident took the life of her husband, Janie chose to stay here and make Prentiss her permanent home. 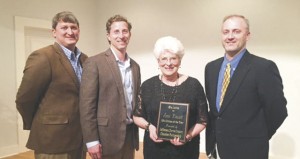 Holley Cochran / The Prentiss Headlight—Janie with her three sons Jacob, John and Josh.

Even as a young man Bro. Winscott loved Mississippi and after completing Seminary he began pastoring churches in the state. St. Louis had been her home but Janie Winscott followed him to pastorates in Scuba, Lumberton and then Prentiss. It was during their tenure in Scuba that she discovered Bible drills and it became instilled in her heart the importance of learning the scriptures. In the 29 years she has been in Prentiss she has influenced the lives of hundreds of school children and her passion had helped instill scripture in the minds of many of our children and youth.

“It’s about God and His Word, explains the 71 year old Winscott, “not about me. I didn’t grow up with Bible drills but I have learned the value of memorizing scripture. We say we are people of the Word but how can we be if we don’t know the Word.”

“Three years ago when I was a teacher of a Beth Moore study of the book of James one of the projects suggested was to memorize the entire book. It was first a matter of pride as I thought now if some of my pupils memorize it won’t I feel foolish if I don’t.”

Winscott developed her own system of memorization and accomplished her goal and was able to quote the whole book. Memorizing the book of James began her own journey to “hiding God’s Word” in her heart and mind. Since then she has memorized 11 Psalms, Isaiah 55, Matthew 5-7, I Corinthians 13, II Corinthians 4, Romans 4, 8, 12 and the books of Books Philippians, Colossians, and I and II Thessalonians.

The school teacher in her realized the process goes even beyond the advantage of knowing scripture and teaches concepts such as thinking under pressure, learning to carry a job through to completion and develop instant recall.”

With her boys grown and away, her parents now gone and Winscott retired, she states scripture has continued to minister to her and saved her sanity at times. She explains she chooses to memorize scriptures that speak to her striving to know them, apply them to her life and give expression when quoting to the meaning they have brought to her. She also feels an extra benefit is keeping her mind sharp as she ages.

“Nature abhors a vacuum,” states Winscott. “God’s Word says you have to take captive every thought. Something is going to fill your brain. Better the scriptures than worry or Oprah. Don’t let it be worry. Learn to quote scripture instead of being obsessed with worry. Be proactive in fighting on the battlefield of the mind. Jesus gave us that example by quoting scripture to Satan. We can balance out the discouraging words we hear on the news and everywhere else by filling our minds with the encouraging word of God. God’s Word gives us comfort, peace, encouragement and raises you up from the pit of the devil. It has revolutionized my life.”

“I really look forward each day to finding what God is wanting me to learn.” says Winscott enthusiastically. She continues to learn and to teach others at Prentiss Baptist Church teaching Sunday School, 4-6th grade choir, and Bible Drills at church and with home schoolers. She goes to ECF with Eleanor Girard to play the piano for a weekly devotion time and is active in JDC History Group.

Her latest endeavor has brought changes to the community in a more visibly physical aspect. Winscott says God impressed her to serve others by cleaning up overgrown areas of the neighborhood. PHS, JE Johnson Elementary, Jefferson Heights, and some churches and individual homes have benefited from her answering God’s words to her.

Winscott states, “You recognize the voice of the Lord because you are listening. I would just be somewhere and the Lord would say to me, “These people could use your help. Race or religious affiliation has been no issue. Now I carry tools in the car all the time. It has been neat to watch the Lord go before me. I’ve gotten to know more people in the community and it has led to helping others by teaching English as a second language.”

Though Janie Winscott continues to emphasize none of this is about her those whose lives have been touched by her selflessness and willingness to obey the voice of God are richer for the experience and thankful for the Divine Appointment that brought her to Jeff Davis County. 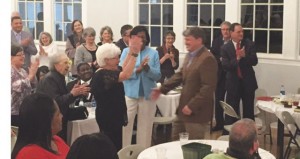 Holley Cochran / The Prentiss Headlight—Mrs. Winscott was unaware that her three sons were on hand for the awards ceremony. They were hidden in a back room and surprised her as she approached the stage to accept her award.