Many of us were touched by the story in the news of 66 horses rescued from Copiah County that were abused and neglected. Even those who are not particularly animal lovers were stirred by the closer to home encounter in Jeff Davis County where horses were neglected to the point of resorting to cannibalism to survive. We may have been caught up in feelings for those neglected and abused animals for a while and then soon forgot but there are those in our county who do more than feel sorry for these animals. They have opened their home and hearts to these unfortunate victims for physical care, rehabilitation and love.   The Riley’s family farm, Prentiss MS is dedicated to rescuing abused animals. “All Gods creations deserve life,” states Shelly Riley. 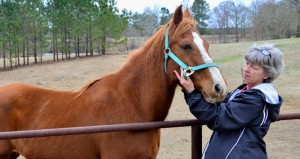 The first rescued horse, Concho, has had a permanent home with the Rileys for eight years now and is “spoiled rotten” according to Shelly Riley.

On their home place, the Double AA Ranch and Rescue, MS Highway Patrolman Frank and Simpson Co. Hospital RN Shelly Riley have been taking in neglected and abused animals for years. First it was only smaller animals, abandoned dogs or cats, goats, an occasional wild animal nursed back to health and returned to the wild. Eight years ago they took in their first equine rescue, Concho, and they were hooked on helping these magnificent animals.

The Rileys then took in a couple of expert cutting horses from the owners, an older couple with failing health who needed help with caring for their two “babies,” Cash and Shekhinah. They couldn’t bear for them to go just anywhere and particularly wanted them to go to the Rileys where the elderly couple knew they would get plenty of care and love.

About three weeks ago the Rileys took in a couple of the Copiah rescues traveling 608 miles round trip to bring the horses home. They have also been thriving under Shelly Riley’s loving care. Physical scars are still evident but Chance and Fisher are gaining weight and slowly developing a trusting relationship. Since then Dreamer from the same group has been added.

“The Arabian Rescue Mission raised $40,000 to buy the 66 horses from the Copiah rescue to save them from slaughter,” stated Shelly Riley. “They were staged at different facilities until they could be rehomed. They were given vet checks and treated then foster homes and adoptions were solicited. I knew I wanted some of them. Chance and Fisher were so poor when they first arrived but they have been putting on the pounds the last two weeks.” 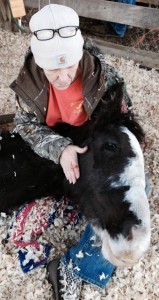 Even with expert care and plenty of love from the Rileys, Tinker who was a JDC rescue didn’t survive.

On Face Book Shelly Riley chronicled the heartrending events after Tinker, the only survivor of the rescued JDC horses, was placed in her care. When a very weak and sick Tinker could not stand volunteers came in with equipment to keep her on her feet and worked day and night to save her.

“We worked for a week with all our might to save Tinker,” states Riley. She was starved and the only one of nine that was found alive. We weren’t able to save Tinker but she passed knowing what love was.”

Up to this point Shelly Riley had felt she could save any animal brought to her with love and proper care and had done so successfully until Tinker. Riley tried hard aided by other knowledgeable equine-loving friends and Tinker tried hard to respond but her system was too weak and decimated and she succumbed to death.

Though she knew it would be a difficult challenge the death of Tinker devastated Shelly Riley but she states she and her husband are committed and continue to accept horses in need of love and care.

Riley’s goal for these animals is simple: total rehabilitation. “We want to get them healed and to the right weight, in time earn their trust and continue to work with them until they can be ridden. It takes a while but sooner or later it’s like a light bulb will come on and they will realize they can count on us. Horses can sense the feelings of people around them and it takes patience, gentleness and love to gain their trust.” 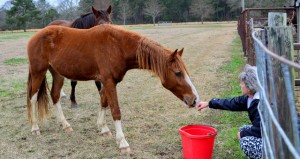 Copiah Rescues Fisher and Chance are beginning to show some trust toward Shelly Riley because the diligent care and love she bestows on them.

Riley states there are definite expenses involved and they are committed but appreciate any donations people want to give. Some folks have donated buckets, feed and square bales of hay. The Co-Op has been very helpful as well as local people who volunteer time to help with the horses.

“We have some great local people including local Vet Roger Sullivan and horseman Perry Sorey who have helped us greatly, states Riley. Whatever we didn’t know Perry did and has lent his expertise, time and assistance. We appreciate all those who have volunteered their time and help.”

Animal neglect and abuse in the Mississippi is only a misdemeanor charge but many believe there should be stronger penalties. Shelly Riley states it takes all of us to stop abuse stating, “If you know of an animal that is the victim of abuse or neglect don’t just close your eyes. Call the sheriff’s office and report it. They have been good to check out any complaints and do something about it.” 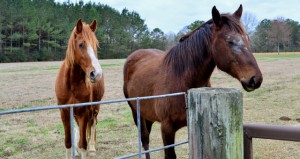 Physical evidence of their previous circumstances are still visible on Chance and Fisher but they are responding to the love and care of the Rileys. 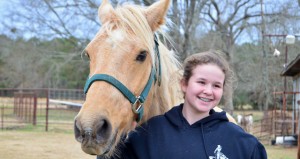 Volunteer Katie Speights helps with the horses and states she has learned much from the Rileys. She works with Shekhanah, a beautiful expert cutting horse who found a new home at the Double AA Ranch & Rescue.