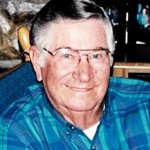 During his younger years, Curtis served in the Army. He was retired from Southern Natural Gas Company.

He was preceded in death by parents; two brothers, O.H. Beckham and Herman Beckham.