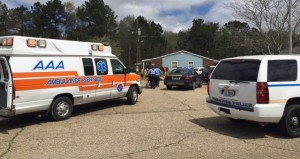 Holley Cochran / The Prentiss Headlight—Officers responded to reports of gunfire Wednesday afternoon at Meadow Hills Apartments. Elvadus Rhodes was shot in the back and carried to Jefferson Davis County Hospital for his injuries. The suspect, Timothy Taylor, was on the run and later apprehended in the East St. Stephens Road area. According to Rhodes, the incident occurred over money.