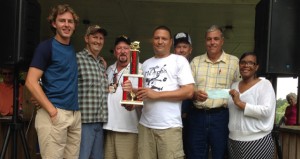 The Board of Supervisors’  Blowin’ Smoke BBQ Team took first place and $700 in the Chamber Partnership 1st Annual Cook-Off Saturday at the Longleaf Trace Park.

Each team was given two slabs of ribs and a turn-in time. After the first turn in, the teams were narrowed to the top three. Those three turned in a second entry to decide their rank. 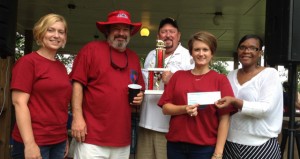 A total of 15 teams competed in the event.

While the teams were grilling and smoking,  candidates in the upcoming election took the time to introduce themselves and meet with citizens.

There were also arts and crafts booths set up with items for sale and the kids enjoyed a gigantic slide.

The function was a huge success and will be a yearly event.

The Chamber Partnership would like to thank everyone who participated and showed their support.