Bring on the home grown vegetables

There is nothing that tastes any better than garden fresh vegetables. Tomatoes, corn, snap beans, peas, butterbeans, and we cannot leave out the watermelons and cantaloupes that make our mouths water just thinking about them. 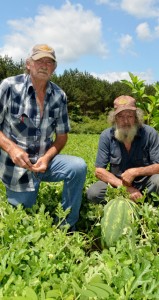 In this day and time so many have careers that require long hours traveling many miles away from home that much of the fertile JDC land stays unplanted and the family garden fades into a thing of the past as we get our vegetables in cans or frozen packages. However, our love for the taste of fresh homegrown vegetables has not diminished.

Glen, James (Buck) and Hunter Dyess are still in the business of farming and share their bounty. These “homegrown” veteran farmers are descendents of generations of farmers that settled in the Greens Creek area.

Glen Dyess, a disabled cancer survivor, states he does the “finger pointing” and shares his “stored up knowledge” with the others as his contribution to the endeavor. His son Hunter helps with the project when he is home from his regular job with MG Dyess on the pipeline.

“I’m trying to teach the kids the value of a dollar and how to survive in this economy,” states Glen Dyess, grandfather of seven. “We also raise hogs and chickens and rabbits. We’re not out to make a lot of money but maybe break even. I was born and raised on this ole place and pulled a cotton sack many a day and there is more to gardening than just throwing seed in the ground.”

James Dyess, retired from Louisiana crawfish and catfish industry, is the equipment operator, meaning he says, that he owns the tractor. He states he does the plowing because it takes experience not to plow up the plants.

“The garden is 4-5 acres and scattered in three different spots,” states James Dyess. “Neighbors let us use their land to keep it cleaned up. We grow our plants in a green house and transplant when they are about 6” tall. We use very little grass killer, just around the edges of the fields, and no pesticides except a little around the tomatoes because of the bugs.”

These two country cousins have crops of tomatoes, corn, peas, cantaloupes, and watermelons both red and yellow, some they sell at the Farmer’s Market in Prentiss and some available for picking as they come into season. They even planted a few hills of tobacco “just to experiment.”

The Prentiss Headlight / Glen Dyess hopes to teach the next Dyess generation how to survive in a lagging economy by growing their own food. Glen Dyess with grands Justin Ward, Ellie Dyess, Destiny Raynes, Harley Hennis and Davison Hennis. 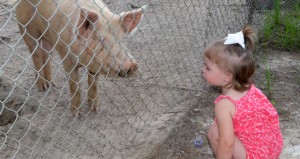 The Prentiss Headlight / Ellie Dyess’ favorite are the hogs raised on the farm for meat and market.

Holley Cochran / The Prentiss Headlight_Young Nathaniel Thornton was busy at the opening of the Farmers’ Market in Prentiss Friday.... read more