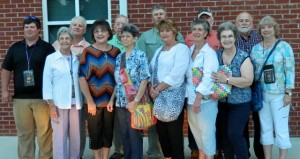 The people of Jeff Davis County are caring and mission minded folks that show their concern for others not only with words but in deed also. Many churches and organizations as well as individuals of the county spend time and money reaching out in an effort to better the lives of others here and abroad.

Whitesand Baptist Church of Prentiss has partnered with local Nicaraguans in the construction of a church building in a developing area of Janatepa, Nicaragua. The Church sponsored team of thirteen also held a VBS for the local children in a vacant dirt lot adjacent to the construction site.

“You wouldn’t believe how much a simple roll of black plastic and a couple of canopy tents (provided by the generous people of Whitesand) meant to us on this trip,” states Shirley Burnham, “We used these for VBS to keep children from having to sit in the dirt and be in the hot sun. There were 60-plus children of various ages who enjoyed Bible stories and fun activities that our JDC kids enjoy in nice air-conditioned buildings. Our men worked along side local residents on the church construction. Their dump truck was a horse and wagon and the cement mixer were men with shovels.”

Team members also helped feed children at the First Baptist Church of Diriamba and attended church services there and at the house church that will move to the construction site when the facility is completed. Bro. Charles Burnham and his son, Jonathan brought messages at these churches through interpreters. Bro. Charles Burnham also had his first experience of preaching on a local radio station with the aid of an interpreter.

The pastor of the new church, Dr. Aldopho Rodriguez, is practicing medical doctor who also cares for the physical and spiritual well being of the people.

“We have been so blessed with the ability to construct fine facilities here that it is imperative we do what we can to help others where they are not so financially blessed,” states Bro. Charles Burnham. “Whitesand is a church of mission minded people who want to share the gospel wherever the Lord leads and I am grateful for that.” Before taking on this project WBC and its team had participated in funding and constructing the completion a medical clinic in a remote area of Nicaragua.

National missionaries, Jossiel and Marjorie Diaz of Rancho Hebron Ministries did an excellent job of setting up in-country needs such as housing, transportation and interpreters before the Whitesand group arrived.

The trip was not all work and the group enjoyed exploring cultural differences including the local public market and a lake formed in an inactive volcano as well did some shopping in local shops.

Members of the team included Whitesand pastor Bro. Charles Burnham and his wife Shirley, David and Sherry Lee, Harry and Sarah Carter, Deloris Smith, Laverne Aycock, Stephenie Hayman, Mary Lou Garner, Glynn Griffith and Bro. Jonathan Burnham of New Bethlehem BC in Simpson County and George Barron of AL. They will all tell you the trip was hard work and not a vacation but worth every bit of the effort put into it. 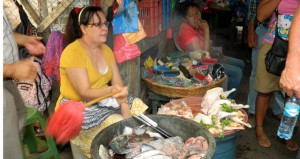 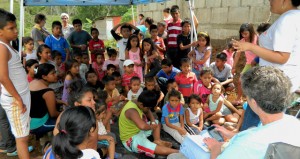 The Prentiss Headlight / Mary Lou Garner tells the Bible story through an interpreter at the outdoor VBS held by the Whitesand Team members. 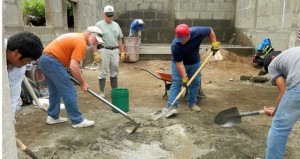 The Prentiss Headlight / Jo Jo Flowers battimg for the Prentiss All-Stars in the District Tournament held over the weekend... read more