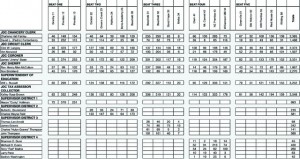 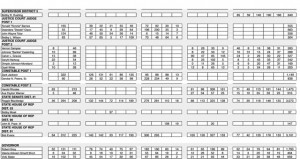 Shortly after midnight, the stage was set for celebration on the part of those who gathered fifty percent plus one of the votes cast in the August primary and more campaigning for others.

Incumbents Clint Langley and Ron Strickland defeated their opponents to continue serving as Chancery Clerk and Sheriff, as did Charles Reid in the District Two Supervisor’s race.

District Four Supervisor Michael Evans and Terry Mathis will be back out seeking votes for the August 25 election. The District Three Supervisor position will also be in a run-off between John Thompson and James Graves.

Both Constable Incumbents, Zack Jackson and Harold Rhodes, will retain their position.

There will be a run-off for both posts in Justice Court. Incumbent Ronnie Barnes will face Deede Clavo in Post One and Darhyl Hartzog will face Calvin Graves in Post Two.

Will Russell will face Allen Ray Dyess and Kysetta Warner Armstrong in the General Election in November for the office of Superintendent.

The Primary Run-off Election will be held Tuesday, August 25, with the General Election following on November 3.

Burn ban in effect for JDC

The Prentiss Headlight / Jefferson Davis County is under a Burn Ban effective until August 7, 2015. For more information... read more