When asked to tell one fun family fact about her family, 2015 Miss Mississippi Contestant Brooklyn Mooney of Collins stated, “My great, great, great grandparents John Adam and Dora Faler emigrated from Germany to Bassfield, MS and built a house called the Faler Mansion that is still standing today.”

The Faler house is still a matter of architectural admiration and has it significant place in the history of Bassfield and Jeff Davis County.

Granddaughter of the original owners Norma Harvey Williamson and her husband Jerry now live in a home on the Harvey family place near Prentiss after they decided weathering two hurricanes (Camille and Katrina) on the coast was enough for them. She remembers the Faler home with great fondness and has good childhood memories of family gatherings there filled with conversation and laughter. 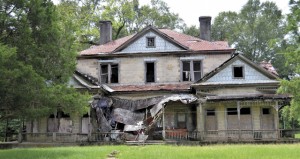 The Prentiss Headlight / The Faler house is in sad repair with the  front porch fallen in but still exhibits some of its former architectural grandeur.

The stately home built around 1910 of solid concrete blocks that were poured on-site, was designed to look exactly the same from all four sides. Original owners John Adam and Dora Strahan Faler, immigrants from Germany, were reportedly “fearful of a fire,” noted a 1979 Jackson Clarion-Ledger article, so he used as little wood in the construction as possible. However, Williamson (Bessie Faler Harvey’s daughter) was a visitor to the house in her early childhood before the older Falers moved into a smaller home nearby and says in hearing the stories over years told by her aunts (the Faler daughters) about the home she never heard mentioned her grandfather having a fear of fire. “I listened to the sisters tell many tales about growing up there and enjoyed all the stories but a fear of fire was never one of them. I think he just wanted a house that would last forever,” stated Williamson.

The structure itself took several years to build and the contractor had no family of his own so he moved in with the Falers while he worked on the house and became a part of their family. After completion of the structure he stayed with the Falers until his death.

The square house is uniquely the same on each side with the exception of the front and back doors. Surrounding the house is a concrete porch with hand carved railing completely around the top and bottom of the porch that was once screened. The entire roof was covered with designed tin. At one time a particularly striking feature was the stained glass windows that adorned nearly all of the 60 windows and every window had shutters. The glass is gone now and the gaping windows remind us of eyes to the soul of this grand old lady that has seen many changes in its beloved town of Bassfield. Twelve gables on the house, three on each side, two on the lower level and one on the upper level add to its decorative charm. In the reception hall beyond the front door, or foyer, can be seen two steel beams extending up through the 12-foot ceiling and there is also a fireplace and staircase. Down the concrete hallway there is a parlor (or courting room) and bedrooms. Williamson states that with seven girls someone was always courting. At the end of the hallway is the dining room and to the left the kitchen and to the right the “fruit room.” One can only imagine the past grandeur of each room enjoyed by the German immigrants who found a home not only physically but also in the hearts of their neighbors. 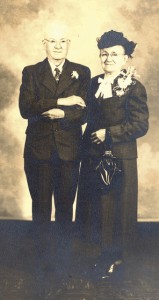 There were eight fireplaces downstairs and some of the original mantels grace the homes of the grandchildren as family heirlooms.

No one would guess the two chimneys on opposite sides of the structure service 10 fireplaces in the home.

The bedrooms downstairs each had closets with doors that connected to the adjoining bedroom. There are two large bedrooms upstairs beyond a narrow wooden staircase.

Behind the house are the remains of a smokehouse, chicken house and livery stable or barn that speak of everyday normal activities of a small town family.

It has been told the aged and abandoned structure was actually haunted, a rumor that did not sit well with the family who remembered the home as warm and friendly and a place where memories were made and love was found but no reasons for a restless or unhappy spirit to take up abode.

After the six of the seven Faler girls left home, the couple built a smaller home next to the big house and lived out their years there with daughter Mercedes remaining to care for the couple until their death.

John Adam Faler lived a long and fruitful life and when asked his secret he said along with his regular church-going he never drank any whiskey, never used tobacco and never cursed a word in his life and squared danced every chance he got for exercise and fun.

In more recent years the abandoned structure has made a perfect place for Halloween activities and became the fun “haunted house” for the community with scary for fun antics performed by locals. However its crumbling façade has made it unsafe and it remains as a visible reminder of its past grandeur and the happy family that lived there.

Williamson states her grandfather John Adam Faler was quite an unusual man and loved to square dance. In fact, he gave dancing credit for helping him beat diabetes, old age and the blues. In a newspaper article about his 83rd birthday celebration he states he believes folks who allow themselves to grow creaky in mind and body should “take a crack at that kind of dancing.”

He retired as bookkeeper for the Faler Brothers Gin at Bassfield and sold his interest in the business so as to have more time for fun. He stated he attended some 2,000 square dances and “skipped plumb around the globe if all the miles were strung out in a line. You can get you some exercise while you’re playing—and you can’t beat that combination.”

Faler danced away his blues up to his 87th birthday recorded in the Prentiss Headlight.

Though the house is in sad disrepair and is no longer owned by the family there has been talk and inquiry into funds for its restoration as a historical landmark. Whatever the future is for the Faler House it still stands as a hallmark of Bassfield history and worthy of note as much or more for its housing a warm loving family who made their home in JDC and achieved their American dream as for its unique construction and design.