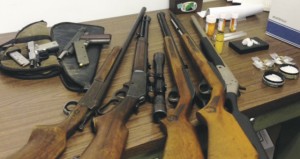 The Jefferson Davis County Sheriff’s Department, assisted by the Prentiss Police Department, executed a search warrant Monday afternoon at a residence in the Greens Creek community. Three ounces of methamphetamine was seized from the residence, along with seven guns & a large assortment of prescription medication. One of the guns seized from the residence was reported stolen out of Louisiana. The narcotics seized had a reported street value of around $8,000. Marvin Terrell Smith was arrested & charged with possession of a controlled substance with intent to distribute & possession of stolen property. Crystal Smith was arrested & charged with possession of prescription medication without a prescription & resisting arrest.

Fireworks will fill the sky this Fourth of July as people across our nation, and citizens here in Jeff Davis... read more