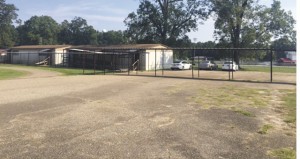 The Prentiss Headlight / The Parking lot of the Alternative School at Prentiss High where shots were fired Friday night after the varsity football game. The incident involved no students or residents of Prentiss & no one was injured.

On Friday night, August 28, at approximately 9:45 p.m., there was an altercation in the parking lot of the Prentiss High School, in which there were multiple gunshots fired.

According to preliminary reports, the altercation stemmed from a previous argument between the suspects regarding a shooting at a Hattiesburg nightclub earlier this year.

The Prentiss High vs Collins High Football game had just concluded and patrons were making their way to their vehicles when the shots erupted.

No injuries were reported, although there were four cars struck by gunfire. Two of the vehicles were occupied.

“Regarding the incident at the Prentiss/Collins game, I want to make clear that none of our students were hurt, and all necessary actions were taken following the shooting,” said Will Russell, Jeff Davis County Superintendent.

“We had sufficient security and city police at the game. In the future, we look to increase patrol in the front area where crowds tend to gather, and add more lighting at the front of the stadium. I have discussed this with our chief safety officer as well as city police, and we will increase security throughout the football season.”

“We have gotten off to a good start this school year. Our students are well behaved and focused. I hope this incident will not cause confusion and put a damper on the positive beginning,” said Russell.

“I would like to personally and publicly thank the Prentiss Police Department and the Jefferson Davis County Sheriff’s Department for partnering with us for our athletic events throughout the year. They have given their full commitment and I appreciate their services and partnership in keeping our school campus safe,” he added.

The Prentiss Police along with the Mississippi Bureau of Investigation are investigating the incident. Arrests will be forthcoming