Students at J.E. Johnson Elementary are getting really, really excited about math and you can see it on their faces in a video thatís going viral.

Every day toward the end of the day, at 2:15 precisely, the kids in each grade from Kindergarten through 6th grade compete against each other in “Fact Dash”.  “Every grade is responsible for a different math skill,” said first-year Principal Carrie Hammond-Walker.

There are three classes per grade, and each class goes head to head against the other classes in their grade to determine the winner each day. “Every single day,  the building is really loud,” said Walker.

Not only do the students get excited over Fact Dash, but there is even an incentive. Each time a class wins a battle in the hallway, the class gets a sticker and the class with the most stickers at the end of the month is recognized at the Blast Ceremony, which carries with it the Blast Party. There is a DJ at the party, played by Hammond-Walker’s husband, who is an alumni of the school.

What is not shown in the video, though, is the continued excitement for the daily competitions before and after school, outside of Fact Dash.

According to Hammond-Walker, kids drill each other in the school cafeteria and parents say their kids are asking for flash cards.

Fact Dash is something Hammond-Walker brought to JEJ. this year from her previous schools. It is too early to tell what effect this has on test scores so far at her new school, since it is her first year, but she is already seeing a difference in the kids.

“When you ask any of the math teachers, they say the kids are doing so much better when it comes to those basic facts, because they want to win that game,” said Hammond-Walker.

“It shows that we are so out of the box. We do not sit in those desks and learn as usual. Everything is our classroom, from the cafeteria to the gym to the hallways,” she added.

The kids are being challenged to learn their facts instantaneously, within seconds, as they compete against their classmates in other classes,” said Jerel Showers, a teacher JEJ who is seen on the video using the flash cards. Teachers have been using the new game for about five weeks.

So far, the video has been viewed more than 117,000 times on Facebook.

News Channel 7 aired a segment on JEJ, the recent viral video, and Fact Dash at its 6 p. m. and 10 p.m. broadcast on Tuesday.

“We had no idea it was going to go viral. The phones have not stopped ringing at JEJ. Channel 22 is coming Wednesday to do an interview and I did a phone interview with NBC from New York this morning. We are so thrilled to get this positive national coverage for our school,” added Hammond-Walker.

To see the video go to www.facebook.com/jejohnsonelementary. 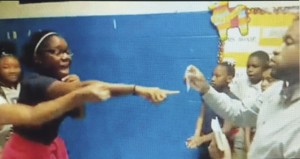