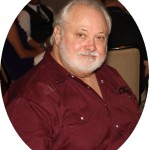 Born on February 3, 1950, Mr. Shivers grew up loving music at an early age. He used his God given gifts with the worship team at Sharps Chapel Church of God in Bush, Louisiana, where he played the drums.

He is preceded in death by his father, Ellis James Shivers; his mother, Letha Higgs Shivers; one son, Kevin Lynn Shivers; and one brother, Jackie Lynn Shivers.

Funeral services were held Friday, October 2, 2015, for Mrs. Patsy Holloway Speights, who passed away at her home on... read more