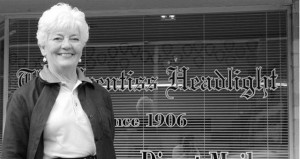 Speights became the general manager of The Prentiss Headlight in 1987 and added the editor title to her name in 1992.

After 25 years of faithful service to The Headlight, town and community, Speights retired in 2012.

When she retired, former Daily Leader owner Bill Jacobs wrote, “She was the epitome of the Norman Rockwell painting of a small town newspaper editor. She did it all: covered meetings, wrote news stories, sold advertising, laid out the pages and made sure the papers made it to the post office each week on time.”

A prime example of that was when the governor of Mississippi attended the groundbreaking ceremony at the Foley Plant in Prentiss.  As she approached the governor, he extended his hand, “Patsy, how are you doing?”  This was after her retirement.

Jim Prince, past president of MPA, worked with Speights at the association. “Patsy Speights embodied what it is to be a community newspaper editor,” Prince said. “She reported the good news and the bad. Mostly, she kept the public officials in her sphere of influence accountable by telling the truth unflinchingly, and in doing so gained the respect of her community early on in her ‘second career,’ even among those she made uncomfortable with her special way of being so direct with words. She led our association well during her tenure as president, especially on postal matters, and was a source of knowledge, strength and encouragement to us all. She was a true friend and I will miss her.”

At her funeral Friday, several spoke of Patsy’s charisma. Her niece Tracy Stamps Waits, who worked with Patsy at The Headlight for years, shared stories from the office.

“Every day was a work day when you were employed by Aunt Patsy, but if she walked through that front door with her boots on instead of the usual heels, you knew she meant business. She was on a mission and we all stood at attention,” she said.

Mayor of Prentiss Charley Dumas spoke of his hiring at The Prentiss Headlight before he became mayor. “Patsy called me to write a couple of stories. Before I knew it I was employed.”
“During her time as editor of The Prentiss Headlight, Patsy has asked the tough questions, often been lied to, more often cussed at, and threatened many times more than any of us would care to now, but she maintained herself with a grace and style that was uniquely her. We’ve lost our greatest cheerleader and she will be missed,” he added.

Her work ethic didn’t apply to The Headlight alone. Niece Tressann Stamps Everitt told family stories from throughout the years.

“If you people here in the press business think she worked you to death with paper and a keyboard, you should have been in the corn field with her. We dreaded the words ‘the corn is ready.’ Thousands of ears of corn to be pulled, shucked, silked, cut and bagged. Aunt Patsy checked every single ear of corn, and if it wasn’t right, she sent it straight back to the beginning of the assembly line. I bet I silked every ear 20 times before it passed her inspection.”

“In the South, there are southern belles, steel magnolias, and stainless steel magnolias, but there is only one seasoned cast iron magnolia – my Aunt Patsy. There were two ways of doing things in Aunt Patsy’s world; her way and the wrong way. It was black and white and there is no coincidence in the fact that she worked for a newspaper for 25 years. The only thing that was ever grey about her was her hair.”

Janice Griffith, who is still employed with The Headlight, worked with Speights for over 12 years. “There was never a dull moment working with Patsy. I often referred to “Miss Headlight” as a disorganized perfectionist (lovingly of course). She preferred to describe herself as a fire-shoot-aim type person. Whatever it was, we clicked,” Griffith said.

“Patsy had a way of teaching life lessons without even knowing she was teaching them, and I can hear her just now saying ‘that’s enough girls, we have a paper to put to bed!’” 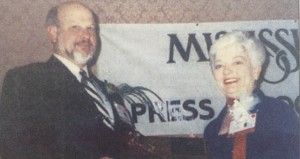