Debbie Gentry / The Prentiss Headlight—Creating his photo collage works of art and writing music are Gary Bass’ present passions. His new song, Let Everyday Be Christmas, will be featured in the Bassfield Christmas Parade.

An art walk in Hattiesburg Nov. 7th featured local artists including Bassfield’s Gary Russell Bass. Two of his photo collage art pieces were juried and chosen to represent his unique style of art for display at the event. 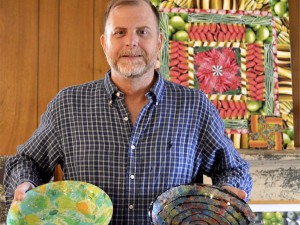 The “November 7th, 2015 Emerging Artists Exhibit” was held at the Hattiesburg Cultural Center coinciding with the November Art Walk event Saturday from 5-8.

Hattiesburg Arts Council is the official arts agency of the City of Hattiesburg. Its purpose is to support, promote, sponsor and coordinate existing arts related activities and organizations in the community and to establish new ones where the needed.
Bass was born in Montgomery, AL to Major Thomas Earl and Thelma Freeman Bass. His father retired from the Air Force service just two days after he was born and the family returned to the home of their roots in Bassfield.

Gary Russell Bass is an intriguing enigma of creativity all rolled up into one individual. His creativeness has developed and reached into many venues over the years and continues to evolve as he challenges himself in new areas.

Bass discovered his first creative talents at an early age when he could pick out hymns on the piano and his sister Carol taught him to add left hand arpeggios. He says even now the music he writes contains a lot of arpeggio use. He sits at the piano with no sign of a written note in front of him and emotional melodies flow from his talented hands and mind simultaneously. He says he did take piano lessons for a while but his teacher claimed he was her best and worst student because he wanted to play what was in his head and not what was on paper. He presently is the pianist for Bassfield Methodist Church. 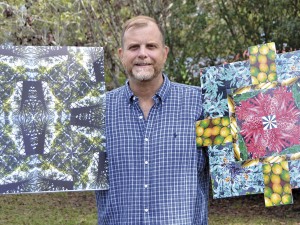 Amusingly enough when this interviewer commended on his excellent memory on the piano Bass stated that it does not carry over to every day aspects because he can’t remember where he put his car keys and had to have his car towed to get it rekeyed.

His CD titled, Rising, gives a representation of his works and you can see and hear him perform his new Christmas song titled Let Every Day Be Christmas during the Bassfield Christmas Parade, which is also this year’s parade theme.

Bass graduated from Columbia Academy with honors and turning down a music scholarship to William Carey, went on to get a BS in Marketing and Business Administration at USM pledging in family tradition to Kappa Sigma. He followed his dream to live in a big city to New York working for an import company in sales and service and it was there he began creating art to supplement his income. He started with reverse painting on glass and sold under the name of Blackdot Art at street fairs stating celebrity Carly Simon stopped by one day and bought a piece.

“I was really working the starving artist look then, muses Bass showing a picture of a younger self with long silky hair, “I made art on the roof with music playing and those were just great days.”

By the time he moved to Massachusetts, color copiers had some out and his craft evolved into painting sheets of glass, making colored copies of it and weaving strips together to make a whole new product and from there he began weaving portraits and photos into unique works of art. His present use of photo collages using angles and shapes create amazing unique “kaleidoscape” perspectives that vary as widely as the individuals who view his work. The library in Ridgeland will be featuring an exhibition of Bass’ art October through 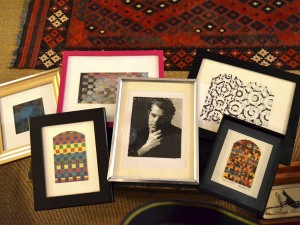 “It’s all about the perspective,” states Bass. “Some of my creations are best looked at from a distance and each person sees something different. Focus on the center and breathe and see what patterns emerge.”

After a few years in Arizona and a life threatening accident in Alaska that he states changed him drastically he came home to stay now living in Bassfield with his canine family, Elly Mae and June Bug, both as personality filled as their owner.

“None of my work is perfect,” states Bass, “but we are all imperfect.”

Bass does do commission work and prints of his art are available. Let Everyday Be Christmas will be released Nov. 11th on line at www.cdbaby.com and a portion of the online sales will be donated to the Bassfield Fire Dept. and first responders. For further information contact Gary Russell Bass at 601-943-5353.

The Prentiss Headlight St. Elmore and Queen Ester Sutton receiving commendation from Representative Bob Evans who is backed by the... read more