Members of Baptist Brethren and Sisters met at Greens Creek Schoolhouse, originally in Lawrence County,  on November 30, 1890, for the purpose of organizing a church.

He then called for the Brethren and Sisters who desired to enter into Covenant with each other to keep house for the Lord. At which time, the following Brethren and Sisters baring letters of recommendation from their former church or churches came forward to wit: Elder J.W. Tolar, A.E. Tolar, Peoria Tolar, Elder F. M. Dyess, Sister Betsy Robbins, R.C. Murray, M.G. Murray, his wife, Sister Elizabeth McPhail, Delaney McPhail, L. King, Parthenia King, his wife, Henry Nations, Sarahann Nations, his wife, T.E. Dyess, and Mary E. Dyess.

They were duly constituted into a church state and the right hand of fellowship was extended to them by the presbyter.

On motion, the church shall be called by the name of Greens Creek Baptist Church. The Articles of Faith and Gospel order were read and adopted.

On motion, it was agreed to hold their next meeting at this place on the second Sabbath in December which time was set apart to meet and call a Pastoral Supply. R.H Martin would be the moderator and J.W. Tolar Clerk Protem of the monthly meetings.

On motion, Brother R. C. Murray was appointed to commune with Clear Springs Church on the subject of aiding in building a house of worship. The meeting was adjourned. 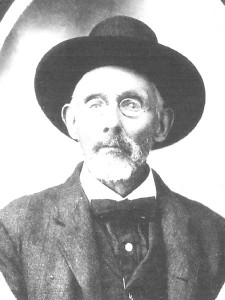 On March 15, 1891, the church met after services and on motion went into an election of a Supply and Clerk for the balance of the present year, which resulted in the choice of Elder J.W. Tolar as Pastor and Brother R. C. Murray as Clerk. They both being present accepted the call; it was adopted and ruled.

After regular services, Sister R.B. Tolar was received by letter. On motion, it was agreed to hold regular meetings on the third Lord’s Day and the Saturday before in each month.

The first member to come in for baptism was John McPhail. The preacher for this meeting was Dr. J.J. Goss. This was the first of the agreement to apply to the Bethel Association for membership. They elected Dr. J.J. Goss and Brother J.W. Tolar as delegates and Elder F.M. Dyess and Brother R.C. Murray as alternates. Money was sent for 15 copies of the minutes.

On October 11, 1891, there was a motion to take up business to build the house of worship. The house was to be built on land given by Noel Tolar. The location as it is now known, was the west side of Greens Creek between the old cemetery and the creek bank. R.C. Murray was appointed as treasurer to keep up with the funds for the church.

The first deacon to be elected was Brother Noel Tolar, on November 15, 1891.

There is a space of approximately 18 years and nine months, that there are no records of the church.

The minutes show Elder D.A. Anderson was pastor in the year 1909.

Deeds show Greens Creek Baptist Church bought one acre of land on September 21, 1923, where the church is now located.

In the latter part of 1923 and the beginning of 1924, Brother R.C. Dyess and Brother Monroe Dyess cut and hauled logs to the mill to be cut into lumber for the church building.

In 1927, Carl Dyess, son of Brother R.C. Dyess and Sister Dovie Reid Dyess, was the first to be buried in the new cemetery at its present location.

Discussion about a new church building took place on November 18, 1944. Brady Smith was appointed head carpenter to build the new church building that is occupied today. At that time, church services were held Saturday evenings before the third Sunday, Sunday morning worship, and Sunday night worship once a month.

A special meeting was held October 25, 1978, for the purpose of discussing the building of restrooms, separate from the church building, off the northeast corner. 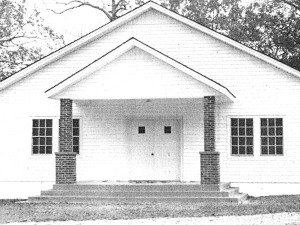 The Prentiss Headlight / Greens Creek Baptist Church at the 100 Year Celebration in 1990.

On December 17, 1978, Greens Creek Baptist Church delivered fruit baskets to needy families in the community. That tradition is still carried on today.

The church’s 100 year anniversary was celebrated November 25, 1990. Brother Hilton Entrekin brought the morning message.
Brother Entrekin was elected to serve as pastor on November 15, 1992, and remained pastor until June 6, 1999, when he resigned due to health issues.

On November 21, 1991, Brother Wayne Woolwine was elected to serve as pastor.

The church voted and approved on February 27, 2000, to start holding mid-week services on Wednesday nights.

Plans were set into motion on February 17, 2002, for additions to the church building. This included building two bathrooms inside, a choir loft and a fellowship hall. Bids were collected and work began on October 6, 2003. 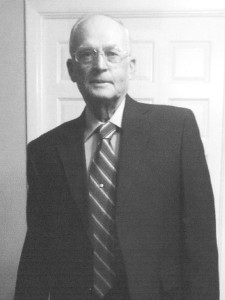 On December 6, 2004, plans were set into motion to construct the baptistry for the church.

The church started holding Sunday School classes on October 9, 2005. On March 12, 2006, plans were made to hold the first Vacation Bible School.  It was voted on July 16, 2006, to began holding weekly Sunday night services.

Brother Bob Burge was elected pastor on July 19, 2009, after Brother Wayne Woolwine announced his resignation. He began preaching on August 5, 2009 and is still currently the pastor of Greens Creek Baptist Church.

Greens Creek Baptist Church will celebrate its 125 year anniversary on Sunday, November 29, 2015. Services will begin at 10:30 a.m., with lunch to follow. 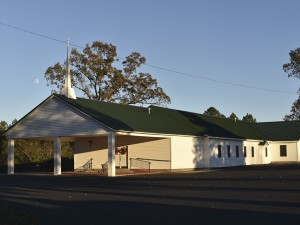 Holley Cochran / The Prentiss Headlight—Greens Creek Baptist Church as it stands today. The church will celebrate 125 years on November 29, 2015.