ELLISVILLE – Jones County Junior College students in the Fine Arts Department performing groups, JC Voices and JC Jazz were thrilled with the response of the second annual toy drive in conjunction with their, “A Jingle Jazz Christmas” concert.

The public donated hundreds of toys as admission to the holiday concert at JCJC. The evening of jazzy Christmas tunes was spectacular, only topped off by the number of donated toys from the audience.

“We are very happy with the response to the toy drive as part of a new JCJC tradition in the Fine Arts Department.  The generosity of so many people attending the JCJC Christmas concert will help a lot of kids in the area have a merry Christmas.

Our students said they enjoyed being able to give back to the community as they showcased their talents,” said Dr. Susan Smith, JCJC Fine Arts Department Chair.

The Angel Tree began in Lynchburg, Virginia in 1979 and provided a way for the local citizens to be personally involved in sharing with those less fortunate in their community.  For more information, call the Fine Arts office at 601-477-4094 or follow JCJC Fine Arts on Facebook and Twitter. 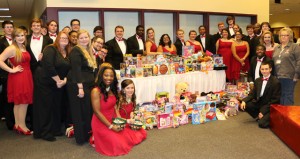