ELLISVILLE – Everyone knows final exams are stressful and to help relieve some of the tension at Jones County Junior College, students were given a little “puppy love.”  Several activities are planned each finals week and this year, the Student Government Association and its sponsor, Sonya Dykes decided on a 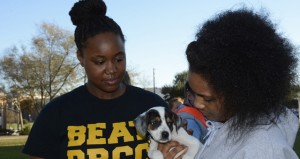 The Prentiss Headlight— Le Daria Moody of Ellisville and Victoria Pittman of Prentiss try to play with a sleepy puppy while on a break from studying for finals at JCJC.

different type of “therapy.”  After reading about pet therapy and how universities had invited puppies to campus to play with students as a stress reliever Dykes decided to see if Jones students would respond positively.

“It was amazing to see the transformation in the students,” Dykes said. “Some of them literally walked up like zombies and within a few minutes of picking up a puppy they were smiling and relaxed. One girl broke into tears!”

With the help of humanities instructors Patti Smith and Murray Windham, both of whom volunteer at the Animal Rescue League, nine puppies were brought to the JCJC campus for students to enjoy for a couple of hours.  Griffin Schrock had been studying for a western civilization exam when the opportunity arose to chill out with puppies.

“I had been in the library for a long period of time and I needed some stress relief,” said Schrock, a business and public relations major from Jackson. “Petting puppies was the best idea Jones has ever had for stress relief during exams. I think they should do it every semester for finals.”

The puppy who won his heart was a little black Labrador retriever.  “I just held him and played with him,” Schrock said. “He even fell asleep after a while. It was adorable.”

Pre-vet major Bridgett Cooley from Ellisville realized she was headed on the right career path as she put her black Labrador retriever asleep.