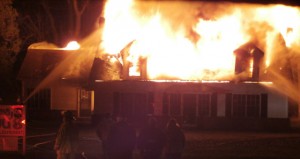 The home of the late Louise Bourne on Columbia Ave. became fully engulfed in the early morning hours Saturday. The home was being used as a consignment boutique, Mama Lou’s, run by the wife of Mrs. Louise’s grandson Patrick Bourne. Tiffany Bourne was in the building at the time the fire broke out and was alerted to smoke and flames by her dog, Daisy. No injuries were reported. The cause of the fire is under investigation.

Holliman elected president of the Board of Supervisors

Holley Cochran / The Prentiss Headlight—Corky Holliman has been elected President of the Board of Supervisors. Corky Holliman, Supervisor for... read more