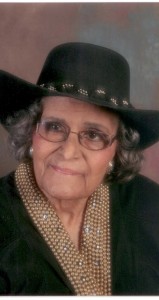 Mrs. Ruby K. Johnson was born in Thomasville, Alabama to the late Cluggard and Margaret Richardson Kennedy.  She attended school at Linden Academy in Linden, Alabama.  She joined Clay Hill Baptist Church at an early age.

She later moved to Chicago, Illinois where she met and married, Eural L. Johnson, Sr.  They moved back to Mississippi and she united with the Green Grove M. B. Church and remained a member until her demise.

After moving to Prentiss, her husband, Eural took over the family business, Johnson Funeral Home.  Mrs. Johnson assisted him in making the business a success; until he passed away in 1975.  At that time, she became proprietor of the business and helped many in need who did not have any or maybe not all of the money to pay for funeral services.

She saw the need to retire in 1991, and return to her passion of planting and growing her flowers.
Mrs. Johnson was preceded in death by: two sons, Juan Johnson and Eural Johnson, seven sisters, five brothers and one son-in-law, Robert Williams, Sr.